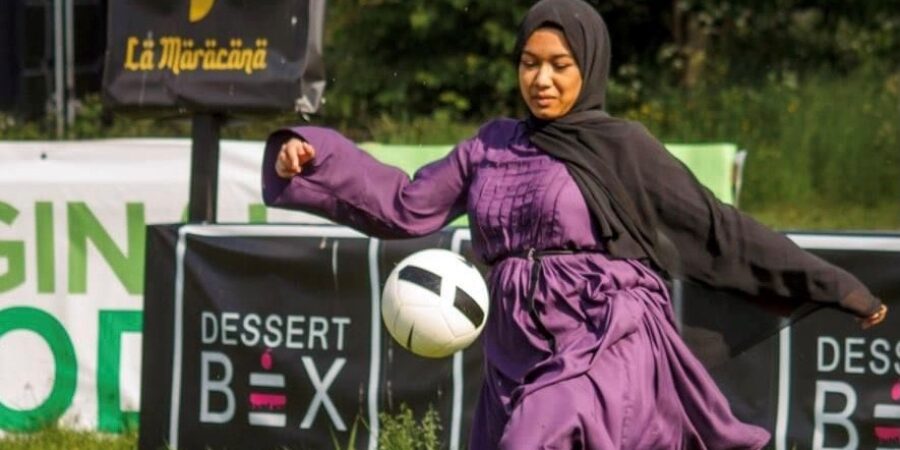 The West Midlands Police and Crime Commissioner says a group of Muslim women in Birmingham, who have set up their own football team, are helping to break social barriers, create a more equal society and tackle violence.

Simon Foster believes the team, who play in Bordesley Green, are challenging and changing attitudes, creating a more equal society and can help to prevent and tackle violence against women and girls. As well as training sessions, the team hosts regular workshops on issues such as empowerment.

The new team, some of whom play in traditional Muslim headscarves like the hijab, are known as Saltley Womens’. They have been set up within the Saltley Stallions Football Club, which is largely made up of male teams and aims to support people from underprivileged backgrounds.

On Tuesday, Saltley Women’s, who are being supported by the region’s Violence Reduction Unit, will break their Ramadan fast at a community Iftar before playing a friendly game of football.

It’s thought they are one of the first all Muslim women’s teams in the region. Whilst they currently play 5 a-side they are hoping to expand to 11-a-side in September.

The West Midlands Police and Crime Commissioner Simon Foster, said: “By forming an all Muslim women’s football team, these women are challenging and changing attitudes and demonstrating that more women in sport is a force for good.

“Across the country we have a big problem with violence being committed by men against women and girls. Initiatives like this can help to empower women and challenge and change that.

“The beautiful game of football is for everyone. That’s why this team has my full backing and I’d urge other women who are interested in getting involved in football or other sports, to follow their lead and pave the way, so that women’s sport can continue to go from strength to strength.”

Yasmin Nessa, Co-Founder of Saltley Womens’ said, “The team uses football to empower local women. To give them access to a sport that they wouldn’t normally have access to.

“It’s vital that we break down female stereotypes and allow women, of all religions, to play a sport that has, in the past, been dominated by men.”

“Partners from across the violence reduction partnership are delighted to host this community iftaar and celebrate the amazing achievements of the girls and young women that form the Saltley Stallions.