The National Audit Office’s report into ‘Financial sustainability of police forces in England and Wales’ has shown that West Midlands Police is hit harder than almost any other force in the country with the force receiving cuts of 23%, compared to just 12% in other areas.

Police and Crime Commissioner David Jamieson is campaigning hard to get a fairer funding deal for West Midlands Police.

“West Midlands Police currently gets £43 million a year less than the government’s own formula says that the force should receive. It is an issue I have been campaigning on and will continue to do so in the coming months.

“In the next few weeks I will be meeting with MPs from across the political spectrum as part of my cross-party campaign on this issue.

“The region is hit doubly hard because the West Midlands is taking the second lowest contribution from local taxpayers in the country. That means we are more relianton central government funding, and so a flat rate cut to the central grant hurts us more than places with higher precepts. While central government provides 83% of the West Midlands Police budget, for higher council tax forces this is as low as 46%. For example, cuts in government funding mean Surrey Police’s budget will fall by just 12%, but low tax West Midlands Police will lose 23%. Given that our crime rates are higher, with more serious threats to the community, this simply isn’t fair or sensible.

“I am not campaigning for the total amount spent on policing across the country to increase, that is an issue for the MPs, but I am adamant that the West Midlands should get its fair share.” 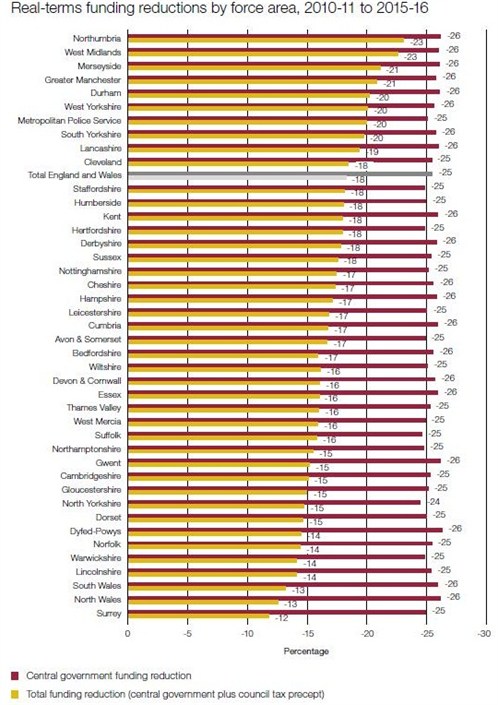 The National Audit Office report can be found here.