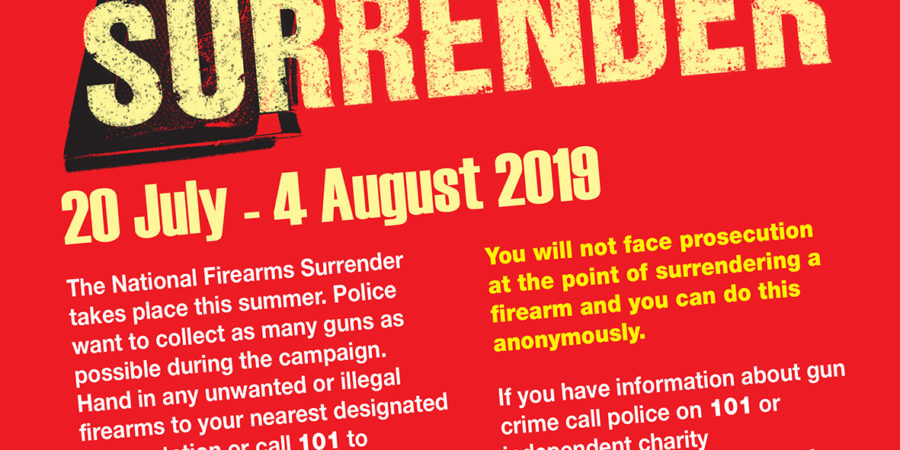 Police forces across England & Wales are appealing for the public to hand over any unwanted guns with a two week surrender of firearms and ammunition, starting on Saturday 20 July 2019.

Many firearms are held in innocence and ignorance of their illegality or are overlooked and forgotten in people’s homes. Others are acquired and distributed by criminal networks to threaten or harm their local communities. The surrender gives the opportunity to dispose of a firearm or ammunition by simply taking it to a local designated police station and handing it in.

The National Ballistics Intelligence Service (NABIS) co-ordinated the last national firearms surrender which took place in November 2017 and was deemed a big success with thousands of potentially lethal items prevented from getting into criminal hands.

This summer’s campaign has a particular focus on firearms, stun gun type devices and pepper sprays. Police want to highlight the danger of these items and remind people they are illegal in this country and could lead to a prison sentence for anyone caught in possession.

Assistant Chief Constable Helen McMillan, National Police Chief’s Council lead for Criminal Use of Firearms, said: ”The last national firearms surrender was a success and potentially helped save lives. With the Government’s Serious Violence Strategy underway, we feel it is the right time to ask police forces to run another two week campaign to collect unwanted guns and ammunition. Each firearm we retrieve has the potential to save a life so do the right thing and surrender your weapon.”

“We also want to highlight that stun guns and similar devices are illegal in the UK and may not be brought in from abroad. They may be legal in some other countries but if you are caught with one here you could be prosecuted with possession of a firearm and be put behind bars. This summer’s surrender is a good opportunity to hand in these type of devices.”

“Those people in the UK who order illegal guns or component parts using internet sales sites will also be targeted by police this summer. If you have ordered items from abroad hand them in before we come knocking at your door.”

The surrender initiative is being co-ordinated by the National Ballistics Intelligence Service (NABIS). The surrender will run for two weeks from Saturday 20 July to Sunday 4 August 2019.

Detective Chief Superintendent Jo Clews, Head of NABIS, added: “This is an important national campaign co-ordinated by NABIS. During the last decade our experts have provided police forces with ground breaking ballistic forensic services and intelligence packages to prevent and detect gun crime. Even though UK firearm offences remain at relatively low levels compared to other countries, we cannot be complacent and this surrender will help remove further potential harm from our communities.”

During the campaign period, those handing over firearms will not face prosecution for the illegal possession – at the point of surrender – and can remain anonymous if they choose to.

Guns and ammunition can be surrendered at designated police stations across the UK but anyone handing in a firearm, ammunition or any other weapon during the surrender is advised to check the opening times of their local station in advance by calling 101 or visiting their local force website. Some forces will arrange collection from a home address.

Crime figures issued by the Office for National Statistics (ONS) show that crimes involving firearms in England & Wales (not just discharges) decreased by 2% to 6,525 offences. This is for year ending Dec 2018 compared with the previous year (6641 offences). This follows a period of increased gun crime.

Illegal possession of a firearm can mean five years behind bars and if you are found guilty of possession with intent to supply that can lead to a life sentence.

During the last national firearms surrender in 2017 more than 9,500 items were handed in to police. These included hand guns, rifles, shotguns, so-called ‘antique’ (obsolete calibre) guns and imitation firearms, as well as ammunition. Shotguns were the most popular firearms handed in and accounted for 59% of the total surrendered.

Most of the items handed in were destroyed but a few unusual items were retained for the National Ballistics Intelligence Service firearms reference collection or museums.  Some items were discovered in lofts or garden sheds; perhaps family heirlooms or ‘trophies’ of war.

David Jamieson is Police and Crime Commissioner for the West Midlands area and sits on the NABIS Governance Board. He said “I would urge people to hand in their guns; last time we had thousands handed in. Any firearm in the wrong hands can have a devastating impact and it is no exaggeration to say that each gun we retrieve has the potential to save a life.

“If you or a family member possess an illegal or unwanted firearm please hand it in to the police. It might just be the best decision you ever make. Destroying these firearms will make us all safer.”

NABIS and police forces across the UK are working with partners such as the Crown Prosecution Service (CPS), National Crime Agency (NCA) and Border Force to ensure the surrender campaign is a success.

The Home Office has also lent its support to the campaign, which ties in with the important work going on as part of the Serious Violence Strategy to tackle offences such as knife and gun crime.

Police force representatives and other partners attended a conference in Birmingham last month (June 2019) to discuss the surrender initiative and share learning.