The West Midlands Police and Crime Commissioner has welcomed the fact nearly 250 weapons have been handed in following a two-week firearms surrender. 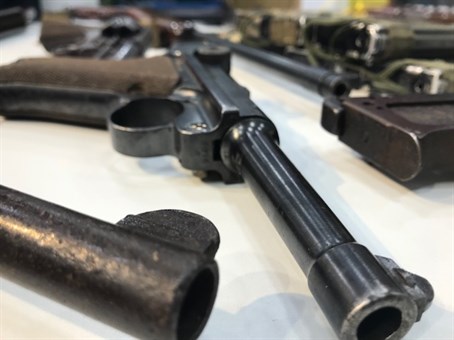 Over 100 working firearms including rifles, shotguns, revolvers and handguns were surrendered during the campaign which took place in November.

In addition, silencers, starting pistols, air weapons and two deactivated machine guns including an SK47 and a ‘tommy gun’ were taken into local police stations across the force area.

Since the end of the campaign some of the weapons have been tested by specialist ballistics officers. They will all now be destroyed.

Officers have also delivered a series of hard-hitting messages to people suspected of being involved in gun crime, urging them to switch to the ‘straight and narrow’. They have also written to wives, girlfriends, mothers, siblings and other family members in an effort to encourage them to report those involved in crime and offer support.

The West Midlands Police and Crime Commissioner, David Jamieson, said: “To hear that nearly 250 weapons, including tommy guns and AK47s, will be destroyed is fantastic news.

“Whilst those guns are on the streets of the West Midlands there is always the potential they could fall into the wrong hands. Every gun handed in is potentially a life saved.

“For everybody who decided to hand in their weapon may I say a big thank you. You have done the right thing.”

Detective Inspector Rod Rose, from force CID, said: “We’re really pleased with the outcome of this surrender where 245 weapons have been taken off the streets which is a fantastic result.

“A number of deactivated weapons were also given in, these could have been easily converted and should they have fallen into the wrong hands, the consequences could have been devastating.

“Officers have also made real headway in the fight against gun crime by positively engaging with a number of people thought to be involved in gun crime.

“We have specialist offender management teams who will step in and help anyone who wants to turn their life around. They can put them in touch with drug groups to break their cycle of crime to fund their addiction. They can also signpost them to training providers, call in the support of the Prince’s Trust and more.

“We will not become complacent, the fight against gun crime continues as we work around the clock to keep you safe.”