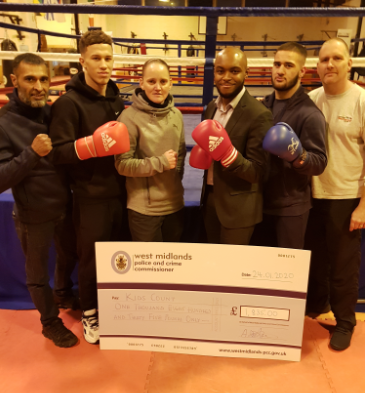 Without doubt, O’Dells Boxing Club run by Tina and Craige O’Dell in Bromford, Birmingham, is the perfect example of a local community champion in action.

Having been in operation for just over six years, the Boxing Club has won numerous awards for its community contribution as well as producing boxing champions.

“We deliver 11 boxing sessions a week at affordable rates, supporting 80 young people every week aged between 8-18. Many of these youngsters visit the club several times a week. We operate on a shoe-string budget and desperately need funding. As you will appreciate, without financial support and without the help of our numerous volunteers including parents and grandparents, many of these youngsters would be at a loss as to what to do with their time, possibly leading to anti-social behaviour and maybe worse.”

With a donation of £1,835, the Active Citizens Fund has enabled the club to purchase kit bags and other much needed sporting equipment. It also enabled the club to continue growing its membership in which high standards of behaviour and discipline by the youngsters is paramount.

The Active Citizens Fund totals more than £400,000 and is money which has been allocated from items seized from criminals under the Proceeds of Crime Act. Each year the Police and Crime Commissioner invites local community groups to bid for a grant from this fund. The money must go to community projects and cannot be spent on recruiting officers.

The Boxing Club has made itself an integral part of the local community. Just before Christmas the boxing club hosted an ice skating event for local families, and then on Christmas Day, offered Christmas dinner for less fortunate local people with some of the boxers cooking and serving the meals.

“I am delighted we have been able to make this contribution. This is exactly the type of activity this fund is intended. I would personally like to congratulate Tina and Craige, the staff and volunteers at O’Dells for the excellent contribution they are making to the local community and in particular, encouraging and supporting the health and wellbeing of local youngsters in their area.”

“As you will appreciate, without financial support our club could not operate leaving many of these young people would be at a loss what to do with their time, leaving them vulnerable to becoming involved in anti-social behaviour or worse. Therefore, on behalf of everyone at O’Dells Boxing Club, I would like to thank the Deputy West Midlands Police and Crime Commissioner for this very generous donation.”