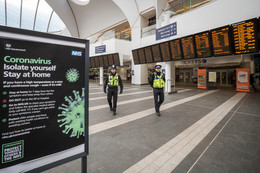 The West Midlands Police and Crime Commissioner David Jamieson says the newly announced coronavirus restrictions for Birmingham, Sandwell and Solihull will be enforced by the police if necessary.

Households in parts of the West Midlands have been banned from mixing in a bid to prevent the virus spreading.

Reacting to the news the West Midlands Police and Crime Commissioner David Jamieson, said: “Birmingham, Sandwell and Solihull is witnessing a worrying rise in coronavirus cases.

“Unfortunately this means measures must now be put in place to protect us all.

“As has been the case for much of this year, I know the overwhelming majority of law abiding people in our region will continue to follow rules without hesitation.

“Of course some people will choose to ignore the new measures and they should know that West Midlands Police will be on hand to remind them of their responsibilities in the first instance, but if they continue to flout the rules then officers won’t hesitate to act if lives are being put at risk.

“We’ve recently contacted a number of people who were choosing to organise large parties or raves. They should be mindful that fines for that kind of offence can amount to thousands of pounds.

“I would urge people to follow the new rules to ensure we can get the virus under control.”