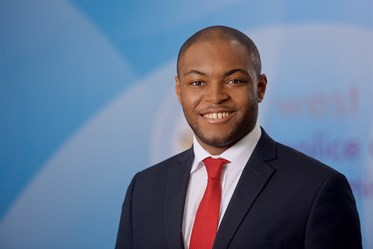 Ashley, 27, has served for three years as an Assistant PCC.

His nomination will go forward to the West Midlands Police and Crime Panel for consideration at its next meeting. Deputy Police and Crime Commissioner appointments have to be confirmed by the Panel.

Ashley Bertie is set to become the youngest Deputy Police and Crime Commissioner in the country.

David Jamieson said, “I am pleased to announce Ashley’s nomination to become the Deputy Police and Crime Commissioner.  He has worked as an Assistant PCC for three years, achieving much on police use of Stop and Search and the Gangs & Violence Commission.  He will continue to ensure the voice of young people is heard loud and clear.

“Waheed has made a huge contribution to West Midlands Police with his work on our change programme and building partnerships with businesses.  I know that as an Assistant Police and Crime Commissioner he will continue that work and much more.

“I am grateful to Cllr Dr Kelly for her work with us, and wish her well in for the future.”

Proposed Deputy Police and Crime Commissioner, Ashley Bertie said, “I am delighted to be given this opportunity. I will be focussing on tackling the rise of violent crime on our streets.

“I have championed the voice of young people and I will continue to do so. As well as giving all members of our community a voice, we also need to give them opportunities. I will be focusing on expanding mentoring schemes and initiatives to break the cycle of violence and keep people safe.”

Waheed Saleem said, “I am looking forward to starting my new role. I am passionate about working with businesses to ensure they give young people the opportunities they deserve. This will also lead to greater prosperity and reduce crime.

“Using my experience gained by serving on the Strategic Policing and Crime Board, I will continue to take an active role supporting David Jamieson in holding West Midlands Police to account.”