New police vehicles to be converted by MacNeillie in Walsall 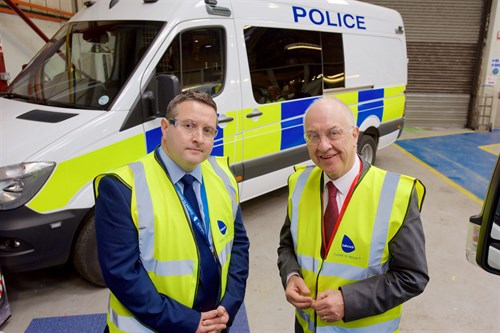 West Midlands Police and Crime Commissioner David Jamieson visited MacNeillie in Walsall, one of Europe’s leading specialist vehicle converters and part of Babcock International Group, to see the coming together of over 30 police forces and agencies in the purchase of more than 100 new state-of-the-art public-order vans.

The Protected Personnel Carriers will be long-bodied, high roof Mercedes-Benz Sprinters which will be taken apart and rebuilt by MacNeillie to create a vehicle which is secure, protected and durable.

West Midlands Police is expected to buy around 60 vehicles under the framework agreement, which will provide economies of scale savings of over £800,000 for the wider purchasing group.

Richard Semmens, Managing Director of MacNeillie, said: “We’re proud that our business has now grown to encompass a strong international footprint – but our heritage is very much rooted in the West Midlands.

“We’re delighted to have been chosen to support this initiative alongside Mercedes-Benz, working in partnership with the Commissioner and one of the country’s leading police forces. We look forward to producing a finished vehicle that will serve our police forces and the public well.”

The Commissioner was given a special tour of the site to meet local workers and see the conversion process.

West Midlands Police and Crime Commissioner David Jamieson said: “Not only is this great value for money, because police forces and agencies from across the country have come together to drive down costs, but this contract is also good for the West Midlands economy as all of the vehicles will be converted in the region.

“I have made it a key priority of mine to ensure wherever possible that West Midlands Police’s budget is used to support the regional economy, as well as keep people safe and reduce crime. It is encouraging to see so many employees from the Midlands that will be involved in this significant project that will ultimately also benefit the people of the region and across the country.”

He added: “The new Mercedes-Benz vehicles are excellent addition to our fleet that will serve the force well over the coming years.”

The majority of MacNeillie employees, and those deployed on the vehicle conversions will be from the Midlands region and will cover a variety of roles ranging from electrician, coach builder, and trim worker right through to livery applicators – who will put the hallmark crest and logo on each van.

MacNeillie has been running an apprenticeship scheme for over 20 years. Apprentices joining the business enrol in a combination of practical work experience and also attend local colleges in areas such as Walsall, Sandwell and Dudley, where a National Vocational Qualification (NVQ) is studied up to a Level 4.

Mercedes-Benz Vans Managing Director Steve Bridge said: “The Sprinter is already well established as the front-line public-order van of choice for many UK police forces. Like all Mercedes-Benz vans, it offers a winning combination of reliability and durability, performance, payload and safety, as well as highly competitive operating costs.

“We are delighted now to have had the opportunity to work with the West Midlands Police and Crime Commissioner, and with our long-term partner MacNeillie, on the development of the state-of-the-art public-order van which is the subject of this new, national framework agreement.”

All the vans will be received by MacNeillie as standard road Sprinters but will then be completely stripped and rebuilt as part of the specialist conversion in order to create a vehicle which is secure, protected and durable.

It is estimated that the first of the new vehicles for the West Midlands will be rolled out later this year.