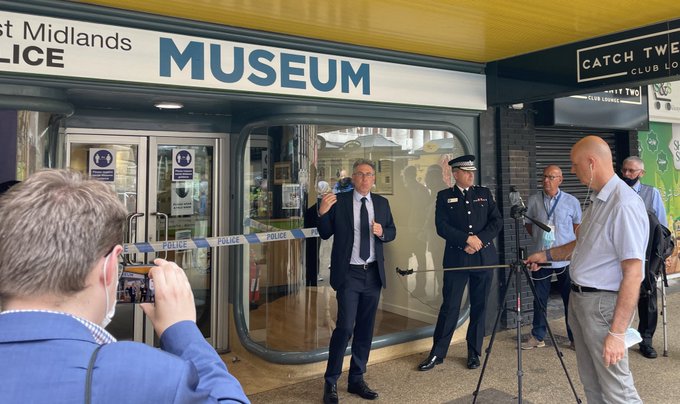 We’ve opened a pop-up museum to celebrate Coventry’s policing history as part of the city’s year as UK City of Culture 2021.

The museum will opened on June 10 at a shop unit in Hertford Street and will house police memorabilia including old uniform and kit such as handcuffs, radios and truncheons.

The 3D replica of the death mask of Mary Ball, the last woman to be hung in Coventry in 1849, will also be on display alongside original exhibits from the murder of Ring-o-Bells pub landlady Amy Davis which happened in 1945.

The West Midlands Police and Crime Commissioner Simon Foster part-funded the museum with money seized from criminals under the Proceeds of Crime Act. This money cannot be spent on police officers.

He said: “The City of Culture is a great opportunity to show the rest of the UK and the world the rich history and heritage of Coventry. It is a modern, diverse city, full of talent but one which knows its past.

“This pop-up will tell the story of policing in Coventry over the years and the vast change that we have seen. I’m pleased to have been able to contribute funding towards this project.”

Councillor George Duggins, leader of Coventry City Council, said: “I’m really pleased that we could find a suitable unit in the city centre so our police colleagues could create what is set to be a great new attraction for local people and visitors. And it will be a great addition to Hertford Street which has also undergone and bit of a transformation.

“I’m sure there will be great interest in the items on display − they tell the story of policing in Coventry but also the story of our city itself. I’m very much looking forward to visiting.”

West Midlands Police’s heritage manager Corinne Brazier said: “Through the displays, visitors will be able to see how policing has evolved through the ages. There’ll also be stories of diversity such as the first female, Black and Asian officers in Coventry, tales of heroism from World War II and of those who made the ultimate sacrifice.

“All of the Coventry officers on the WMP roll of honour will be featured as well as those who died while serving in the Armed Forces during both World Wars.

“It’s an exciting time for Coventry and we’re delighted to be able to include some of the city’s policing history as part of the culture on offer throughout the year.”

The museum, which is being supported by Coventry City Council, Coventry BID and the West Midlands Police and Crime Commissioner, will be open from 10am to 3pm, every Thursday, Friday and Saturday.

Trish Willetts, Coventry BID Director, said: “It’s great to see another piece of culture popping up in our great city, especially when it’s showcasing something a little different that I’m sure will appeal to locals and visitors alike. We have very much enjoyed working with the WMP team to help bring their vision to life and look forward to visiting the museum over the summer.”

A shop inside the museum will have various books on sale, including a recently-released book about Coventry’s policing history, a new Coventry Police mug and other police-themed items.