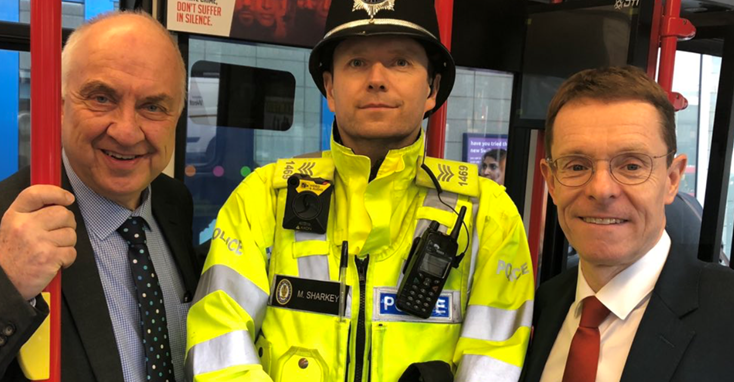 Safer Travel police officers are to be given greater powers to deal with nuisance behaviour on buses, at bus shelters and in bus stations.

The proposed set of new byelaws explicitly forbid a range of anti-social acts on the bus network including smoking and vaping, drunk and disorderly behaviour, playing loud music, vandalism, threatening and offensive behaviour and obstructing other passengers.

Similar byelaws are already in force on trains and trams, but Transport for West Midlands (TfWM), which is part of the West Midlands Combined Authority (WMCA), is set to become the first local authority in the country to adopt them on buses.

Under the byelaws enforcement officers will be able to direct people causing a nuisance to leave the bus or bus station, or issue fines for more serious incidents.

Since 2006, crime and anti-social behaviour on the region’s public transport has reduced by more than 60% thanks to the work of the Safer Travel Partnership between TfWM, West Midlands Police and the British Transport Police. But, according to surveys by passenger campaign group Transport Focus, more people would use buses if they felt safer and more comfortable.

The WMCA Board has today agreed the new byelaws. Now they will be forwarded to the Ministry for Housing, Communities and Local Government (MHCLG) for final approval ahead of their introduction next spring.

“I have been campaigning for these tougher powers for a number of years and I am pleased that our officers will now be able to take more robust action against those who act in an anti-social way on public transport.

“With fewer officers than in 2010, it is vital that police have the powers to be more effective. These new byelaws will give officers much tougher powers to take action against those who disrupt public transport services and those travelling on it. No one should have to put up with anti-social behaviour and these new powers will help the police and other agencies tackle the issue.”

Mayor of the West Midlands Andy Street, who chairs the WMCA, said: “While our public transport is incredibly safe, we know that these types of nuisance behaviour on our buses can undermine those feelings of security for passengers.

“So working with the Police and Crime Commissioner and his office through the Safer Travel Partnership we’ve been looking at ways to cut crime and anti-social behaviour on our public transport network, and that’s exactly what these new byelaws will help do.

“No one who travels by bus should have to put up with nuisance behaviour, and we want to do everything we can to stamp it out.”

A public consultation on the proposals last year found overwhelming support for the byelaws among bus users.

Cllr Ian Ward, WMCA portfolio holder for transport and leader of Birmingham City Council, said: “The message from bus passengers was loud and clear with more than 90% supporting the introduction of these new powers to deal with nuisance behaviour such as being heavily intoxicated with drink or drugs, playing loud music, being abusive, or smoking.

“Encouraging more people to leave their cars at home and use public transport is an important part of our plans to reduce traffic congestion and meet the climate change challenge. But people will only do that if they feel safe and these new byelaws will help us achieve that.”