New task force to tackle FGM in the West Midlands

A new task force – the first of its kind in the West Midlands – to bring an end to female genital mutilation (FGM) was launched on Monday 22 June.

The West Midlands Police and Crime Panel announced the regional task force which will ensure better co-ordination of agencies to eradicate the illegal practice.

A report commissioned by the panel says much is going on across the region to tackle FGM, but different areas and organisations are at different places to deal with this form of child abuse.

The report says: “We call upon all relevant authorities, including those involved in law enforcement, the justice system and public health, to do everything in their power to protect young girls from this life-endangering, health-threatening crime. We also call for appropriate support for women and girls who are victims of FGM.”

The Police and Crime Commissioner holds West Midlands Police to account for its contribution to prevention and securing prosecutions and to fund victims’ services for survivors of FGM in the region.

The practice has been illegal in Britain for 30 years. It is an offence to perform FGM in this country or to arrange for someone to have it done abroad. FGM differs from other forms of child abuse in that it is a one-off event in the child’s life that usually takes place in an otherwise loving environment.

The report says: “It is clear the FGM is not a matter to be culturally sensitive and permissive about.” And it highlights five key steps and nine recommendations that the Police Crime Commissioner and others need to take to prevent future generations perpetuating the practice.

The report says to tackle FGM, prosecution and prevention need to go hand in hand through community education and engagement , campaigning, training frontline staff to spot the signs and risks, as well as working with consistency across the West Midlands.

The report suggests the focus should be in working with communities to prevent FGM occurring and in supporting survivors. It tasks a range of organisations to carry out work to empower communities. Agencies need to avoid engaging with FGM practising communities just on this topic and to recognise the value of broader engagement to meet other needs, such as housing, benefits, immigration, health and employment.

It says councils, health organisations and schools need to make sure FGM is recognised as a priority by their boards and executives to ensure their staff receive training in FGM and that prevention and referral are embedded in the organisation. The report also recommends the PCC should encourage West Midlands Police to build on its existing excellent relationship with the Crown Prosecution Service to maximise the opportunity for a suitable prosecution. 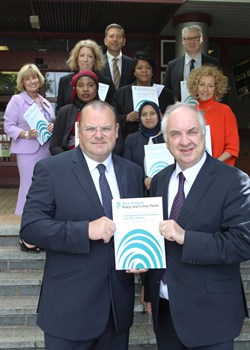 The report was being unveiled in the Council Chamber at Sandwell Council House, Oldbury.

Survivor Sarata Jabbi, from the West Midlands, said she was cut aged seven when she was living in the Gambia.

She said: “The pain of FGM is unbearable and unimaginable, it is the worst pain I have endured in life. Being a survivor of FGM, you live with it for the rest of your life because of the psychological impact it leaves you with.”

Sandwell Council Leader Councillor Darren Cooper, who chairs the West Midlands Police and Crime Panel, said: “The panel condemns the practise of female genital mutilation and supports national campaigns for its eradication. However, we also need to address this serious issue locally. FGM is child abuse and should be treated as such rather than avoided because of cultural sensitivities.

“We are calling for a greater co-ordinated response through a task force which will ensure this crime is something police, prosecutors, social workers, teachers and the wider community are aware of and prepared to tackle. We need to stop one generation from passing the practice onto the next and so protect vulnerable young girls from this violent act.”

West Midlands Police and Crime Commissioner David Jamieson said: “FGM is a horrible, nasty practice that has no place in modern Britain. This is an important report that sets out many of the steps that we all need to take to tackle this crime.

“FGM causes very serious health risks to the women affected, including severe blood loss and infection. Women who have suffered FGM are far more likely to die in childbirth or have a stillborn child. The psychological trauma from FGM can last with women for a lifetime.

“Let me be clear – it is illegal to practice FGM in the UK and illegal to take permanent residents of the UK abroad for FGM whether it is lawful in that country or not.

“People should be in no doubt how seriously we take FGM and that together we will bring the perpetrators of these horrible crimes to justice.

“As well as training officers in how best to help with this horrible crime, supporting the victims of FGM is a top priority of the Victims Commission I have recently set-up. I will be working closely with the police and partner organisations to deliver progress on the report’s recommendations.”

Stephen Rimmer, Strategic Lead for West Midlands in Preventing Violence Against Vulnerable People, said: “This is an important report, which rightly highlights some excellent work already going on across our region, but which properly challenges the police, health, schools and all of our key agencies to go to the next level and work systematically to eradicate this criminal practice as soon as possible.

“We are already in the process of setting up the task force as a result, and I am delighted that Hazel Pulley – who brings real knowledge and insight as a leading headteacher and also as chair of Birmingham Against FGM – has agreed to chair it.”

Hazel Pulley said: “I am delighted to be asked to chair this West Midlands FGM Taskforce. My aim through the use of clear, concise and coherent strategies, stemming from the key recommendations, is to influence others strategically and morally to act systematically against this appalling abuse to children and violence against women.”

Detective Superintendent Tim Bacon, from West Midlands Police, said: “We are working hand in hand with partners to stop this barbaric practice. I urge anyone with concerns over children who may be at risk to come forward so we can stop anyone else being maimed in this way.

“We will bring the full weight of the law to bear on people who are intent on mutilating children in this way, but we still need our communities to come forward with information.”

If you have concerns about a child, or have information about cutting, then speak to West Midlands Police on 101. Or in an emergency call 999. In addition, each local authority has a referrals process to protect children.

The National Society for the Prevention of Cruelty to Children (NSPCC) FGM Helpline is available 24 hours a day for professionals and communities:  0800 028 3550.