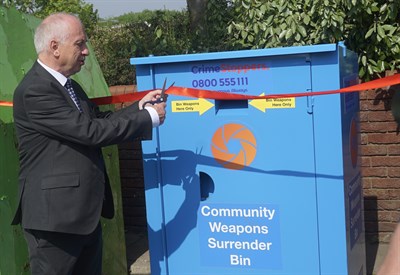 The West Midlands police force area now has 15 weapon surrender bins as the Police and Crime Commissioner continues his planned roll out.

The latest safe and secure container, which is designed for people to dispose of knives, was unveiled today at the Sainsbury’s on Freeth Street in Oldbury.The PCC has made it clear he will place a bin in every local authority area in the West Midlands.

The bins are just one of the ways the West Midlands Police and Crime Commissioner is tackling the increasing problem of knife crime. The other bins have so far been placed in Wolverhampton, Birmingham, Dudley and Sandwell.

Commenting on the arrival of the new bin, the West Midlands Police and Crime Commissioner, David Jamieson, said: “The people of Oldbury have been telling us they too would like a weapon surrender bin for some time. I’m delighted to announce that we’ve been able to make this happen.

“This is just one of my initiatives. I’m ensuring that every single day in schools young people are educated about the dangers of knife crime and I am investing in schemes to divert those same people away from violence.

“The bins are providing people with a legal and safe way to dispose of knives. Every knife posted into a surrender bin is potentially a life saved.”

PC Keith Tedds, who asked for the bin to come to Oldbury, said: “We hope this initiative will help reduce violent crime in Oldbury, as well as give people the opportunity to listen to their conscience by surrendering a knife before it has the chance to potentially hurt them or others.

“We’re offering people the chance to make the right decision and to make Oldbury a safer place for all.”

The 15 knife bin locations across the West Midlands are: