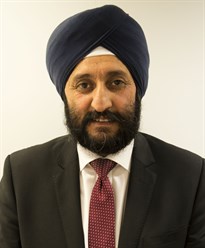 Gurinder Singh Josan from Smethwick in the West Midlands has been recognised by the Queen and awarded a CBE for Political Services.

Mr Josan has been a tireless campaigner against racism, a major supporter of the role of Sikhs in British society and has worked on countless community projects in Smethwick and around the country.

Gurinder is also a member of the Police and Crime Commissioner’s Strategic Policing and Crime Board that scrutinises West Midlands Police.

Gurinder has been involved in anti-extremism and anti-racism work since the early 1990s and is a Trustee of the HOPE not Hate charity.

Gurinder is also a member of the National Executive Committee of Sikh Council UK and a governor and trustee at several schools across the Midlands.

“This is a huge surprise, but a real honour. I’m really looking forward to going to the palace to collect my CBE with my family.”

Gurinder served as a councillor on Sandwell Council from 2002 to 2010 and has previously been a Trustee of the Guru Nanak Gurdwara in Smethwick – one of Europe’s largest and oldest Sikh Temples.