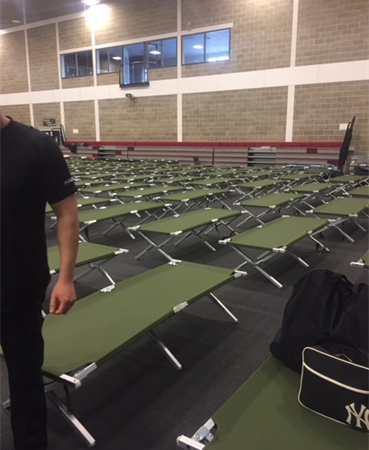 Below is a picture, a statement from the PCC and a statement from Police Federation in relation to the story that some West Midlands Police officers have been forced to sleep on a sports hall floor whilst in the South East of England for President Trump’s visit.

“No officer should be made to sleep on a camp bed, inches from the floor, in a sports hall with scores of colleagues only metres apart after a 12 hour shift.

“Some female officers are even having to sleep in squash courts.

“These officers are in the South East to keep the President of the United States safe. They aren’t asking for luxury accommodation, but the least we can do is put them up in a room with a proper bed.

“Forces up and down the country have struggled with cuts for years. My fear is that local police forces have taken the decision to put some of our officers up in this way because the government aren’t stepping forward to pick up the tab for accommodation.”

Meanwhile, Steve Grange, Secretary of the Police Federation in the West Midlands, said: “Officers have been deployed to another part of the country to assist with a major operation and will be working long and tiring shifts.

“They should expect to receive accommodation that is fit for purpose, enabling them to get the rest period they need before being deployed again.

“This accommodation is disgraceful and an insult to the officers.”