406 knives and many other weapons, including firearms have been ‘binned’ and taken off the streets of the West Midlands. The weapons are from nine knife bins in the region.

West Midlands Police and Crime Commissioner David Jamieson has praised the community response to the ‘bin a knife’ initiative and has urged more people to do the same. 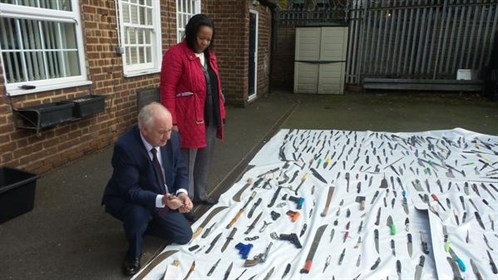 “The knife bins have given people a place to safely off-load items, which could have very easily destroyed lives. They are successful because the community wanted them and are working hard to make sure people use them.

“I would like to express my thanks to the organisations that have agreed to host the bins and for everybody who is helping to spread the message that the carrying of weapons is never acceptable in our communities.  It is entirely due to this ground swell of support from the community that the bins have achieved these results.

“The people who have disposed of these knives have made a positive decision, which in many cases is probably the best decision they’ll ever make.

“The message is clear, don’t carry a knife, it is no way to protect yourself and ultimately there is a much greater chance that it will be used against you.”

“This is a very important result for the West Midlands community, Word 4 Weapons and the West Midlands Police.  The community asked for something to be done about knife crime and the response has been appropriate. I am encouraged to see that the community leaders and faith groups have pulled together to steer people to our bins. The more weapons collected the safer the streets will become.

“To bring our education workshops to schools and to keep the bins in place in 2016 we need further support, so please make your supermarkets and premises open to receive our knife bins.

“Thanks to everyone that has taken part in this surrender whether you handed in a weapon or promoted the weapons bins.”

“Knife surrender bins are one tool among a raft of measures we and our partners have implemented to drive down crime.

“The fact that the secure bins have yielded so many weapons is testimony to the hard work of local people in spreading the message that there’s no place for knife crime on our streets.”

Further information on knife crime can be found here: