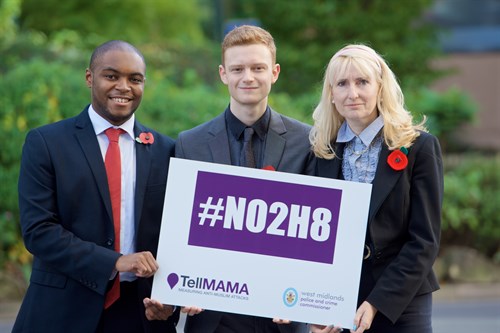 National anti-Muslim hate monitoring group, Tell MAMA, launches the #NO2H8 November campaign across the country and in key cities such as London, Manchester and Birmingham. The West Midlands Police and Crime Commissioner, David Jamieson welcomes the launch of this campaign.

Post Brexit, Tell MAMA recorded one of the highest spikes in both anti-Muslim and racist hate cases, showing that community education work is essential in tackling hatred, prejudice and intolerance. After seven days of the Brexit result, Tell MAMA had received 189 incidents of anti-Muslim hatred and racism.

Tell MAMA will be organising national events across the country and within Birmingham to highlight the need for people to report in hate incidents and in ensuring that Muslim communities know how they can report in both street-based and online hate incidents.

Allied to this, and as part of the #NO2H8 campaign, Tell MAMA is hosting a national awards ceremony that will honour those individuals and organisations who are active in being ‘Upstanders and not Bystanders’. Ensuring that hatred is challenged, is a key part of the national campaign that will focus on cities like Birmingham and the West Midlands area.

Commenting on the campaign, the West Midlands Regional Organiser, Luke Holland said: “I thank David Jamieson and the OPCC for their support and commitment in tackling Islamophobia and hate crime as a whole. The West Midlands is a super-diverse, amazing region and I’m proud to call it my home, wherever someone seeks to divide us we must unite and celebrate our differences.”

They said: “The West Midlands is a diverse region, where people from different backgrounds and cultures get on. Our diversity is a strength and we won’t let hate in any form change that.

“Hate crime in all its forms, including Islamophobia, is not acceptable. Challenging hate crimes is a priority of ours and West Midlands Police have a zero-tolerance policy on it. If it is reported it will be investigated.

“People in the West Midlands have different views on certain issues, but one thing that unites us all is that we are tolerant, decent people who get on with each other. Hate crimes are committed by a tiny minority of people. Those who try to create disharmony and division will not succeed.

“If you are a victim of, or see any evidence of hate crime please report it. It is only by reporting the crime that we can tackle it.”

If people experience hate crime, including Islamophobia, they can: