PCC blog: A time for unity

I recently paid a visit to Birmingham Central Mosque to discuss the issues currently hitting the headlines: namely the Westminster attack and subsequent protest of the English Defence League in Birmingham.

Those at the mosque were obviously concerned about both matters and we spoke in depth about the issues surrounding them.

But what happened in Westminster was a senseless attack on our shared freedom and democracy and the terrorist responsible was exactly that, a terrorist, not a man of faith.

We discussed how Birmingham and the West Midlands are places where people of all faiths, races and religions live together side by side in peace and harmony.

Following my visit, and in answer to the EDL protest on the same day, we decided to hold a community event to show our unity in the face of terror and hatred.

The mosque will therefore be opening its doors to the public on Saturday (8) from 11am until 1pm for a traditional tea party. Tea, coffee and cakes will be served and the mosque will be draped in bunting and Union Flags.

Now, of course, every citizen has the right to peacefully protest but I feel the EDL and counter demos on Saturday will bring little more than division to our city and demand to our police force.

I’d much rather see people at the tea party enjoying themselves with their neighbours and  I hope to see as many people there as possible, focusing on what unites rather than divides us. 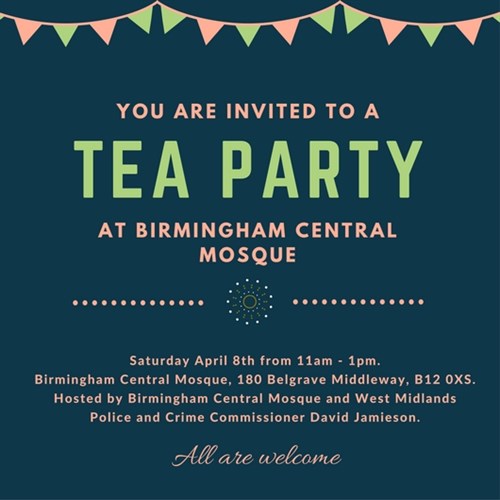 The PCC blogs in his newsletter, which can be read in full here.