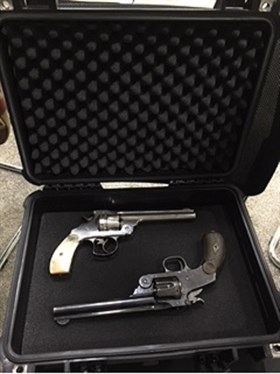 The West Midlands Police and Crime Commissioner is joining law enforcement agencies in calling on the government to act fast and tighten gun laws to tackle the problem of antique firearms being used by criminals in the West Midlands.

David Jamieson is pushing for changes to 9 gun groups or calibres as he becomes increasingly concerned gang members are buying antique weapons and making them lethal by having ammunition made.

Experts at the National Ballistics Intelligence Service (NABIS) have examined ballistic material from two murders in the West Midlands in the last few years which were carried out by someone using an obsolete calibre firearm.

They also suspect a third killing was carried out using an antique gun.

Thirty three year old Carl Campbell died after being shot in the head whilst sitting inside a car in West Bromwich in 2016. The gun used was a .44 Smith and Wesson Russian revolver.

The murderer of twenty five year old Derek Myers from Birmingham also used an antique firearm to kill him in 2015.

Between April 2017 and March 2018 it is thought 10 antique firearms were fired in the West Midlands force area. Four resulted in injury. Six of the shots damaged property.

The BBC’s Panorama programme featured the problem in their documentary LETHAL WEAPON on Monday night.

West Midlands Police and Crime Commissioner, David Jamieson said: ” It is time for the government to act and tighten regulation around antique firearms so we know who is buying guns.

“It is vital the government make it much harder for gang members and criminals in the West Midlands and beyond to get their hands on antique guns which can be turned into deadly weapons with relative ease, said the West Midlands Police and Crime Commissioner, David Jamieson.

“It needs to ensure obsolete calibre firearms don’t fall into the wrong hands.

“It is well documented that the West Midlands has, in recent years, experienced an increase in gun crime. We must not lose any more time. The law needs changing. Lives literally depend on it.”

The PCC is supporting NABIS and West Midlands Police in calling on the government to change the law. NABIS has submitted evidence about certain obsolete calibres to the Home Office. It is hoped it will consider removing them from the obsolete calibre list on public safety grounds.

The PCC wants people to be forced to obtain a licence before buying certain obsolete calibre.

Obsolete calibre firearms under the Firearms Act can be purchased lawfully without a licence if kept as an ornament or curio, unless someone is a prohibited person. If someone has possession of an Obsolete Calibre firearm together with suitable ammunition then it’s a criminal offence.