PCC David Jamieson has been to visit Merseyside’s Police Commissioner Jane Kennedy and her Deputy Ann O’Byrne during a visit to the region, in which he also met with Greater Manchester’s Police and Crime Commissioner Tony Lloyd. 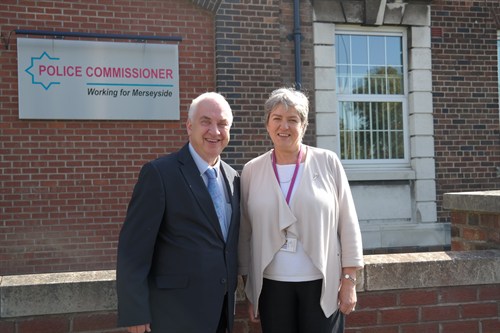 They were among the first Commissioners in the country to meet newly-elected West Midlands Police and Crime Commissioner David Jamieson and congratulate him on being chosen for the role.

David Jamieson said: “Merseyside is very lucky to have someone of Jane’s experience as Commissioner. She is clearly doing a really good job and I was pleased to be able to tap into some of her knowledge and experience. It will be great to now take this back to the West Midlands.”

Jane said: “I am delighted to be among the first Commissioners in the country to congratulate David Jamieson on his election success in person and welcome him to his new role as Police and Crime Commissioner for West Midlands.

“I know that David will carry on the really good work already undertaken by Bob Jones. He brings a wealth of experience to the position and his emphatic victory demonstrates the confidence that people in the West Midlands have in his ability to perform this important role.

“West Midlands Police is one of the most similar forces to Merseyside Police which means we have many challenges in common. I look forward to working with David in the future to tackle these issues and keep all our communities safe.”