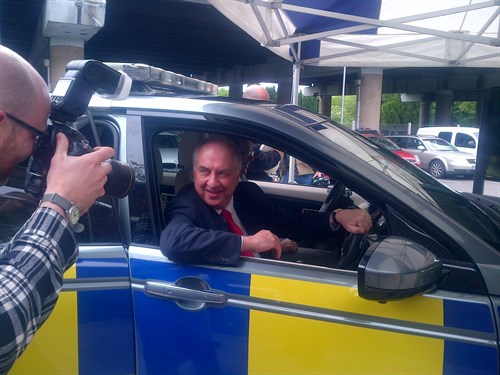 The Office of the West Midlands Police and Crime Commissioner has given £10,000 of Proceeds of Crime Act funding to a new driving simulator to boost road safety.

It is hoped the state-of-the-art software will help cut road deaths by showing the dangers of using a mobile phone behind the wheel.

Simulator test drivers sit in a prototype Land Rover − configured to three large TV screens − and can take on a series of scenarios designed to replicate what it’s like to drive while drunk, tired or distracted by using a handset.

Officers from the Central Motorway Police Group (CMPG) plan to take the system to events across the region, plus colleges and universities in a bid to reach inexperienced drivers who are statistically more likely to be involved in serious crashes.

West Midlands Police and Crime Commissioner David Jamieson – who brought in the ban on driving while using a mobile phone during his time as Transport Minister – said: “Driving while talking on a handheld mobile phone is one of the most dangerous things a motorist can do − that’s why I introduced the ban during my time as Transport Minister in 2004.

“Road safety is such an important issue to me and I thoroughly endorse this crackdown by West Midlands Police and the Central Motorway Police Group.

“There is no excuse for driving while talking on a mobile phone, you put yourself and those around you in danger and the simple message is: don’t do it.”

Today (May 23), sees the launch of a national roads policing campaign raising awareness of distracted driving and clamping down on illegal use of phones behind the wheel.

During the week-long campaign, police will use both marked and unmarked vehicles to catch motorists using mobiles to make calls, text or browse the internet; offenders will be given the chance to attend an educational course as an alternative to prosecution.

Between 2013 and 2015, a total of 7,713 drivers in the West Midlands were prosecuted for driving while using a mobile phone.

Inspector Sion Hathaway from CMPG said: “The simulator is a great bit of kit and a fantastic example of partnership working: the car was donated by Land Rover, Wolverhampton University made the TV stands, and local companies contributed to software and signage.

“The Police & Crime Commissioner’s Office donated £10,000 − using money seized from crooks under the Proceeds of Crime Act − so there is no cost to the public purse.

“The simulator is fun to try out but it gets across a very serious message about the dangers of driving when your full attention is not on the road.

“The number of people being killed or injured as a result using a phone while driving continues to rise…it’s one of the biggest killers on our roads.”

Drivers using mobile phones are also four times more likely to be involved in a crash.