PCC – ‘Good progress’ on BAME recruitment, but plenty more to do 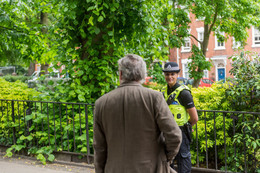 The West Midlands Police and Crime Commissioner has announced that the force has been making good progress on increasing police recruits from BAME communities, but has stated there is still ‘lots more work to be done’.

West Midlands Police has been recruiting tirelessly throughout the year as part of the government’s ‘uplift’ programme. As recruitment started, the PCC David Jamieson has been working to ensure that all communities of the West Midlands are better reflected in the officers joining the force.

As the force works to recruit 1,000 BAME officers over the next 3 years, today’s figures show that nearly 20% of new recruits starting are BAME.

Commenting on the figures, the West Midlands Police and Crime Commissioner, David Jamieson said: “This is an encouraging start to this large scale recruitment drive, but clearly there is lots more work to be done.
“Currently, only 11.5% of our officers are from BAME communities and the force doesn’t really look much like the people it serves.

“Over the next 3 years, West Midlands Police is due to grow by at least 1,200 officers, but once taking into account those leaving and retiring that will mean we will need to recruit 2,750 officers and I am committed that at least 1,000 of those new recruits will be from BAME communities.”

The West Midlands, compared to similar forces in Greater Manchester and West Yorkshire has already has a higher proportion of BAME officers 11.5% compared to 8.7% and 7.1% but and whilst the PCC is pleased with the progress being made in the West Midlands, as more officers are recruited he will be ensuring that even more work is being done to recruit from BAME communities.

He added: “As part of our recruitment campaign, we’re taking a number of measures to engage with communities to explain the excellent opportunity of having a career in the police.

“We’ve sent recruitment information to areas in the West Midlands were we typically haven’t had many applications in the past. We have sent postcards to those living in these areas and the message is clear, a career in the police should not be off the cards just based on your postcode.”

150,000 households in the West Midlands received postcards from West Midlands Police encouraging them to consider a career in policing. The recruitment website has seen around 17,500 visits each week with over 4,500 applications having been received since the campaign begun in March.

Nicola Price, WMP’s Director of People, said: “Our current recruitment drive offers us a wonderful opportunity to increase our workforce, while also working hard to encourage more people from the many diverse communities we serve to consider us when thinking of their future careers.

“Our student officer programmes offer a fantastic way of starting or changing your career while also working towards a higher qualification, which is funded by us. In the current climate, we offer a package that is hard to find in other professions, which is a good starting salary, funded degree-level training and great opportunities for career progression. So, we are working hard to raise awareness and encourage more people to apply, across all communities in the West Midlands.”

To find out how to become a police officer, visit https://jobs.west-midlands.police.uk/