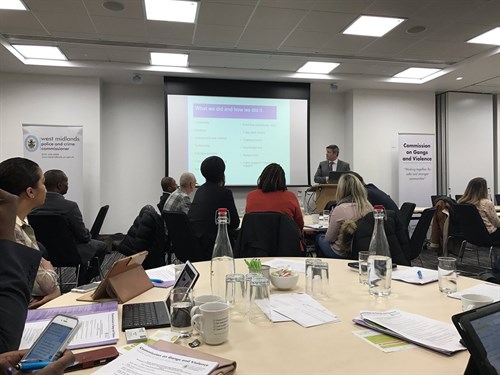 Held at Aston University, the summit informed delegates of the work so far by the PCC’s Commission on Gangs and Violence, as well as sharing best practice from around the country and assessing the impact of gang culture in the West Midlands.

Assistant Police and Crime Commissioner Ashley Bertie said: “This was a hugely successful event that took an in-depth look into the complicated issues surrounding street gangs.

“It explored key issues, such as involving young people in our approach, how we can build stronger community links, developing a multi-agency action plan and what is currently working in terms of interventions and diversions.”

Key speakers included specialist officers from West Midlands, Merseyside and Kent police forces, as well as officials from the Ministry of Justice. Community campaigner Joan Campbell also delivered a poem, which you can read  here. Also attending on the day were youth workers, community groups and practitioners. In total, more than 100 people were in attendance, taking part in workshops, group discussions and Q&A sessions.

Assistant PCC Ashley Bertie added: “One of the main messages from the day was the importance of intervention and steering vulnerable young people away from a life of guns, gangs and violence.

“The summit was a big step in the journey of the PCC’s Commission on Gangs and Violence , which will be publishing an in-depth report into the issue in the spring.”