PCC is grilled by budding journalists

Police and Crime Commissioner David Jamieson, was grilled by a group of budding Jeremy Paxman’s as part of a national initiative to inspire more young people to become the leaders of tomorrow. The year 8 students from Heartlands Academy in Nechells, Birmingham are participating in the BBC School report which gives 11-16 year old students the opportunity to research and create news reports on issues important to their peers.

Asked by the students as to what characteristics make a good role model, the Police and Crime Commissioner said:

“They are usually active in their communities, freely giving of their time and have talents that benefit society.” 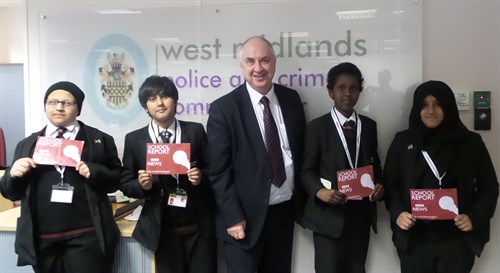 As well as answering a range of pressing questions from the group, the Police and Crime Commissioner also spoke to the children about their career goals and the importance of working hard in the classroom.

The Police and Crime Commissioner said:

“I was delighted to speak to such an engaging and talented group of young role models. The BBC School report allows young people the opportunity to think about issues in their community and to do something about it. I fully support the initiative and I look forward to hearing about the success these young people will enjoy in the future. I have had many tough interviews in the past, but this fantastic group of young people would give Jeremy Paxman and Martha Kearney a run for their money.”

PCC looking for the unsung heroes of the West Midlands