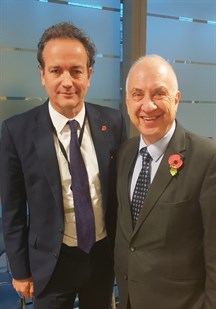 The West Midlands Police and Crime Commissioner has presented his latest piece of work to tackle gangs and violence in the region to the Policing Minister.

The PCC used the opportunity to tell the Minister about his current plans to invest £250,000 tackling the growing problem of violent crime.

The quarter of a million pounds is to be spent ensuring children in Birmingham don’t get involved in gangs and violence.

The Police and Crime Commissioner launched the new fund, which invites third sector organisations in the city to bid for a share of the money, on Monday.

The cash is part of the PCC’s £2 million investment which is being spent following a review of violent crime by the Commission into Gangs and Violence which published its report last December.

The quarter of a million pounds will pay for voluntary and community groups to provide activities for children in areas with high levels of crime. These might include sporting activities, education or training. David Jamieson is also looking for organisations to support children who are at risk of exclusion or are beginning to take part in criminal activity.

The investment follows an increase in gun crime in the West Midlands of almost 50% since 2012. Whilst knife crime has risen by 75% over the same period.

Mr Jamieson also used the meeting as another opportunity to press the government to match his £2m invested to tackle the root causes of gangs violence.

The PCC has pledged to spend £2 million tackling violent crime. Amongst a growing list of projects already underway include placing youth workers in Accident and Emergency departments to spot young people caught up in gang culture, peer to peer mentoring in schools to prevent pupils from getting caught up in violence and the continual roll out of weapon surrender bins.

Responding to the Minister’s comments, David Jamieson said: “I always welcome the opportunity to share best practice with others. The meeting with the Minister was another opportunity to do just that. We have taken a new approach to tackling this issue as it isn’t one we will just arrest our way out of.

“It is no secret that violent crime is rising in the West Midlands. Whilst the police play a vital role in providing a robust response to criminals it is vital we also help people make the right choices and steer clear of criminal activity.

“What we need now from the government is for them to match my funding. I am investing £2 million to tackle the problem of gangs and violence, just think what would be possible with additional support from government.”