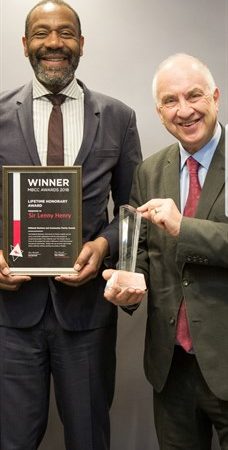 The West Midlands Police and Crime Commissioner has presented Sir Lenny Henry with an award recognising his lifetime of charitable work.

David Jamieson handed Sir Lenny the Midlands Business and Community Charity Lifetime Award which is designed to show appreciation for people who selflessly go the extra mile for charity.

The Dudley comedian has dedicated a large part of his life to charitable work and was one of the founders of Comic Relief which has gone on to raise millions of pounds for good causes.

The Midlands Business and Community Charity Awards are designed to recognise the efforts that people go to and to encourage others to do the same.

The West Midlands Police and Crime Commissioner, David Jamieson, said: “It was a pleasure to present Sir Lenny with the award. He fully deserved it.

“I am also pleased my office was able to sponsor this award as it is important that we take time to recognise those who do so much work to help others.

“Sir Lenny is a fine example to us all and should be recognised for his efforts.

“I hope we can all take inspiration from him and go out of our way to make a positive difference in local communities”.

Receiving the award, Sir Lenny said: “It’s such an honour… My mom always stressed about helping people who were worse off than yourself. She led by example and as a result of that I do the same thing”.

Zoe Bennett the founder of the MBCC Awards said: “The theme of the Midlands Business and Community Charity Awards was to say ‘thank you’ to those who go out of their way to help others.

“I use the platform to allow others to thank those in their lives that selflessly help others”.