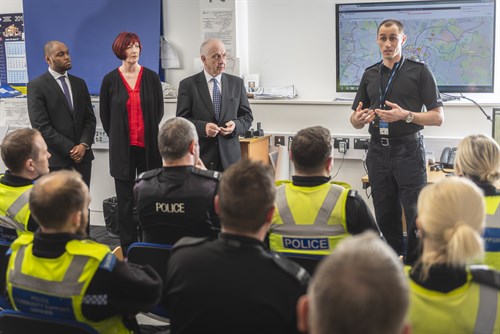 Today’s statistics show crime is increasing nationally and regionally. The West Midlands Police Force area has seen total recorded crime rise by 14%, it has risen by 15% across England and Wales.

West Midlands Police and Crime Commissioner, David Jamieson, said:
“These statistics show that forces around the country are having to deal with an ever greater number of crimes. Crime is rising and it is putting huge pressures on the police.

“In response I am doing all I can to drive efficiencies. I am cutting down on bureaucracy and giving officers the technology to do their job on the move, so they don’t have to come back to a police building unnecessarily. These efficiencies are helping officers spend more time tackling crime and keeping people safe.

“However West Midlands Police has faced £145 million in central government cuts since 2010. Despite being recognised by independent inspectors as a highly efficient force, we have lost over 2,000 officers since 2010, meaning we are having to do more with fewer resources.The force is facing real-terms cuts to its spending power.

“These figures highlight the short-sighted approach of the government by continuing to apply real-terms cuts to police forces’ funding at a time when the pressures on policing are increasing. This is hampering the proactive policing in communities that helps to prevent crime.

“Despite the challenges faced, we are determined to get on with the job of keeping the people of the West Midlands safe.”