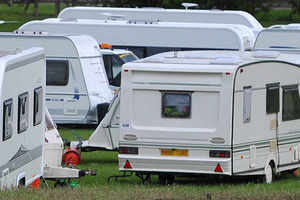 West Midlands Police and Crime Commissioner David Jamieson is holding a summit on Friday 21 September to try and tackle the issues surrounding unauthorised traveller encampments. The event will bring together the police, local councils and groups representing travellers.

One set of protocols for the police and West Midlands councils

Explore the option of ‘negotiated stopping’

Use of transit sites

The Land Commission should consider provision for the travelling community in its spatial strategy deliberations.

Stronger police powers for private businesses that currently incur all costs if an unauthorised encampment sets up on its land.

Campaign to make it a criminal offence to occupy business premises

Share staff across councils to be more efficient and effective, especially out of hours.

Have single points of contact to make it easy for partners and to build up relations in travelling communities.

Improve the way information is shared across West Midlands borders.

Look at how the WMCA could improve this via its non-constituent members.

Last year (2017) there was a small decrease in the number of unauthorised encampments – falling to 414 – compared to 499 in 2016. There is expected to be a small fall again this year, with 244 reported up to August 2018. The PCC is clear that more work still needs to be done.

One of the key recommendations from the last summit was the introduction of transit sites, so that stronger police powers can be enacted. In Sandwell, where a transit has already been introduced, they have seen the number of encampments fall from 84 in 2016, to 33 in 2017, with 17 so far this year. The PCC is calling on other authorities to follow Sandwell’s lead.

“Sandwell Council have led the way by introducing a transit site. It has caused a massive reduction in the number of unauthorised encampments in the borough and is saving the authority money. I am pleased that other authorities are planning to follow their lead and introduce sites too. By doing so the law allows the police to act in a much more robust way, and offenders who break the law are banned from that borough for three months.

“There is still much more to be done, but there is clear progress being made across the West Midlands. This is an issue that I will continue to push on.”

The costs of dealing with unauthorised encampments is costing councils hundreds of thousands of pounds each year. The amounts vary across local authorities, with Wolverhampton facing costs of around £420,000 this year, compared to £238,000 last year. By contrast, Sandwell has seen the greatest reduction in cost, which they largely credit to their transit site. This is a reduction from roughly £250,000 in the year prior to the PCC’s summit, to an ongoing anticipated cost of £10,000 a year associated with unauthorised encampments. The cost of establishing their transit site (£173,000) has more than paid for itself within the first year. Costs in other areas also vary, with Birmingham at around £250,000, Coventry at £64,000, Dudley at £55,000 and Solihull at £140,000 last year.

Assistant Police and Crime Commissioner Dr Lynnette Kelly, said:
“Local councils and the police are making progress on this issue, but there is still more to be done.

“I am particularly encouraged by the progress in Sandwell, who as a result of the transit site they have introduced, have reduced the number of unauthorised encampments and are able to deal with them much more quickly with their new powers.”