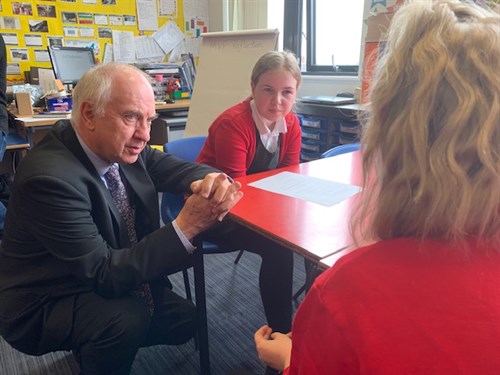 The West Midlands Police and Crime Commissioner is funding a project which is educating primary school children about the dangers of knife crime, violence and bullying.

David Jamieson has backed the initiative which is aimed at 6 to 11 year olds and is the first trial of its kind in the West Midlands. It sees children from Coundon Primary School in Coventry mentor other children.

The Mentors in Violence Prevention programme already takes place in 43 secondary schools across our region, but with knife crime up 85% since 2012 experts have advised that the important work needs to be carried out at a younger age in order to have a greater impact.

The teaching methods and content of the programme is all tailored to the age of the pupils.

The scheme – which was introduced by the PCC through the Violence Prevention Alliance – encourages children to intervene and report behaviour they are worried or concerned about. It’s hoped the project will discourage youth violence and help bring down the number of exclusions in schools.

Initiatives which encourage children to learn from each other have been shown to be particularly effective as they redefine acceptable behaviour for themselves within classrooms.

The Mentors in Violence Prevention course, which initiated in the United States, has shown it can reduce exclusions and detentions by a quarter.

If the initiative is deemed a success then it may well be rolled out to other primary schools in our area.

“That is why it is so important that we intervene at the earliest possible opportunity to educate our young people about the dangers of violence and what they should do if they witness it.

“If we are to tackle knife crime we must ensure everybody, including children, know what to do if they are worried about the behaviour of others.

“This programme has proved to be a huge success in secondary schools and is already getting positive results at Coundon Primary too.”

Jayne Ellis is the Head teacher at Coundon Primary School, she said: “We are lucky that we don’t have a big problem with violence or bullying at our school, but we see it as our responsibility to make sure our children know what to do when they step outside of the school gates.

“The children are learning lots from the MVP programme and the feedback I’m getting from pupils and parents is very positive.

“MVP is tailored so it is appropriate for pupils of all ages. I feel strongly that lots of other schools would benefit if they adopted the scheme.”