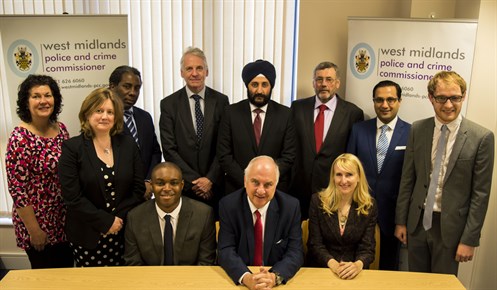 Newly re-elected Police and Crime Commissioner David Jamieson has unveiled his top team to help him hold the Chief Constable and West Midlands Police to account.

The Commissioner’s new board represents the diversity and different areas of the region with representatives from the Black Country, Birmingham, Coventry and Solihull.

Mr Jamieson has also made the board more youthful, reflecting the fact the West Midlands is one of the youngest regions in Europe, with the introduction of 24-year-olds Ashley Bertie as Assistant PCC and Councillor Liam Preece as board member.

In total, there will be six new board members, including former Secretary of State for Defence Rt Hon Bob Ainsworth and Dr Sarah Marwick, who will bring expertise from the health service.

West Midlands Police and Crime Commissioner David Jamieson said: “This is a heavyweight board, with a mix of experience and youth that is also representative of the West Midlands’ diverse communities.

“It is a real boost for me that I have been able to attract such a high-quality team. They will greatly help me in holding West Midlands Police to account.

“I am extremely happy to be bringing in a big-hitter like Bob Ainsworth onto the board. He was an excellent Coventry MP who always stood up for his constituents but also has a wealth of experience at the very highest levels of government and brought in crucial initiatives such as the European Arrest Warrant.

“I have made a particular point as Commissioner of standing up for young people. Younger people are both more likely to be victims of crime and sadly more likely to be perpetrators: that is why I am proud to be appointing two people under 25 – Ashley Bertie and Liam Preece – to bring in fresh perspectives and represent their peers.

“Ashley has previously led from within my office on Stop and Search and helped bring about big reductions in disproportionality and improve confidence in the practice. I am looking forward to Ashley bringing that same determination and fresh perspective that he brought to Stop and Search to other areas of work to drive improvements and increase confidence across a wide area of issues.”

Assistant Police and Crime Commissioner Ashley Bertie said: “I am passionate about the West Midlands being a safer place and helping West Midlands Police build trust and confidence in the force.

“In my previous role I worked closely with West Midlands Police to bring about improvements in the use of Stop and Search and in particular to drive down disproportionality, I will apply the same drive to my work as Assistant Police and Crime Commissioner.

“The West Midlands is one of the youngest regions in Europe and the Commissioner needs strong voices in his top team that reflect that and are in touch with the concerns and aspirations of younger people.”

Bob Ainsworth said: “I am looking forward to this role and hope to make a contribution to public service in the West Midlands. Our police service is all the better for being accountable and with the other members of the board I shall seek to make them so. I will also be a voice from the Coventry area in our deliberations on the commissioner’s board.”

Dr Sarah Marwick added: “I am pleased to have been appointed as a member of the Police and Crime Commissioner’s Board. I will bring my expertise from the health service and aim to help the Commissioner and West Midlands Police build stronger links across the public sector.”

Assistant Police and Crime Commissioners and Strategic Policing and Crime Board members will be  on 12-month contracts.

The new board represents a cost saving on the previous one as the Commissioner will no longer have a Deputy Commissioner earning £65,000 per year (£81,000 pro-rata for four days a week work).

The interviews for the board were observed by a member of the Police and Crime Panel to ensure it was a fair and open process.