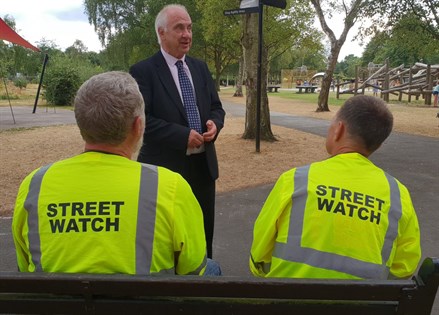 The Police and Crime Commissioner is calling on community groups in the West Midlands to apply for a share of over £700,000 aimed at reducing crime in their neighbourhoods.

The Active Citizens Fund, now in its fourth year, is formed of money seized from criminals under the Proceeds of Crime Act (POCA) and is used to allow communities to take initiative to improve their areas by making them safer. This money, which changes each year, cannot be spent on police officers.

This year, the fund has £710,734 in 2019/20 which will be allocated to groups from Birmingham, Coventry, Sandwell, Dudley, Walsall, Wolverhampton and Solihull.

The aim is to help people in the region reduce crime, local policing teams recommend projects for approval. For 2019/20 all bids will need to show how they will reduce youth and knife crime.

Some of the projects which the fund has supported includes the Benson Community in Smethwick who provide sporting activities for young people, a Community Bus in Birmingham supporting vulnerable people and a pop-up café in Coventry which has built a greater sense of community cohesion.

The fund has also been used to setup a number of Streetwatch groups across the West Midlands who are the eyes and ears of the police, dealing with a range of issues from parking and littering to drug dealing in local parks.

The West Midlands Police and Crime Commissioner, David Jamieson said: “The Active Citizens Fund is a vital source of funding for local people who want to make their area safer.

“Each year we fund a large number of projects with bids ranging from small to large and for a full range of activities and groups.

“This year projects will have to detail in the application how their project will grow active citizenship and reduce youth or knife crime.

“I would urge any group who is committed to improving their community and could do with this investment, which has been taken from criminals, don’t hesitate to submit an application.”

The Active Citizens Fund is administered by Neighbourhood Policing Units, who should be contacted in first instance ahead of submitting an application.

Officers will advise applicants on the process and provide application form and advise whether it is likely to be a successful bid.

Assistant Chief Constable, Sarah Boycott said: “The Active Citizens Fund is a really positive initiative that helps some of the most vulnerable people in our communities.

“We need to make sure that as many people as possible know that this funding is available so individuals and groups who work tirelessly to improve the lives of others can benefit from it and continue to make some really positive changes in people’s lives.

“The West Midlands has great community spirit and the Active Citizens Fund is about supporting that and encouraging more people to get involved with making a real difference.”