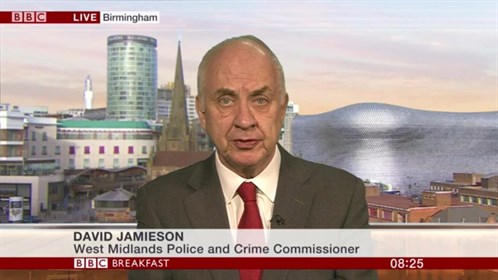 The former Minister for Road Safety has repeated his call for those fines to be devolved to local police forces so offenders pay for road safety instead of the general taxpayer.

The PCC introduced the original ban on using a handheld mobile phone behind the wheel in 2003.

Speaking today, David Jamieson said: “This is about saving lives. Studies have found that motorists who talk on their handheld phone while driving are four times more like to crash.

“I therefore believe that these tougher penalties can only be a good thing – and the vast majority of the public agrees.

“But I want it to go further. I’d like to see our cash-strapped police forces benefit from the higher fines and be given that cash to help keep our roads safe.

“I hope that the government listens to this and brings in this sensible, cost-free change to help police enforce the ban. It will also ensure that offenders pay for road safety instead of general taxpayers.”

West Midlands Police and Crime Commissioner  David Jamieson has previously called on the Transport Secretary to devolve the money from fines back to local police forces.