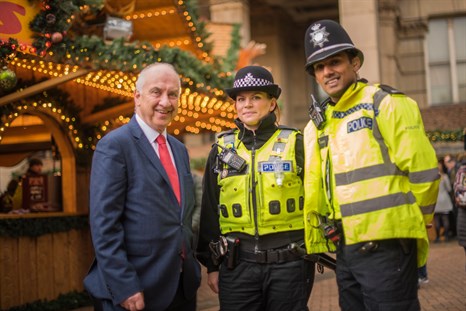 As we draw towards the Christmas break it feels right to pause for a moment and look back on the achievements and challenges of 2018.

There’s no escaping the fact it has been a tough 12 months, but the successes the force has had are entirely down to the hard working police officers, staff, PCSOs and volunteers who work around the clock to uphold the rule of law, 365 days a year.

Even on Christmas Day many of you will be working to keep us all safe. I am extremely grateful for your continued commitment.

I’m pleased to say they are also a team of men and women who are increasingly looking like the people they serve. We will continue to tap into the wide and diverse talent pool that exists in the West Midlands. Only then will we truly be representing all communities across the region.

There are, of course, many things my office can be proud of too.

I have lead a national campaign to tackle the growing problem of car crime. It would appear keyless technology has made motoring convenient for the thief, as well as the driver. In April I called a meeting with six of the major car manufacturers to demand they worked faster to stop their vehicles being pinched from people’s driveways. I have also begun naming and shaming those manufacturers which are having their vehicles stolen most often in the West Midlands.

Violent crime is an issue that naturally worries us all. West Midlands Police has been on the front foot and has ensured hundreds of very dangerous people are locked up. To support that work I am investing £2 million I made available to help tackle the problem of gangs and violence. It’s meant we’ve been able to put youth workers in A&E departments to identify young people who may have found themselves victims of unreported violent crime. It has also paid for violence mentoring in schools, programmes to divert young people away from trouble and the continued expansion of the police cadets scheme which has seen more than 100 young people, some from tough backgrounds, signing up to take part. I’m also pleased to announce I have won a bid to the Home Office for an additional £1.8 million to tackle the problem of violence in our region.

Announcing that the illegal drug industry is driving crime will not come as a surprise. Nor is the fact that it is taking lives. That’s why I am pleased to say we have begun making big inroads in this area and have, for the first time, started safety testing drugs at festivals to help track down unscrupulous dealers and to protect young people.

But, as always, there have been plenty of challenges.

The number of crimes recorded continues to rise.  Reported offences are up more than a third since 2013. There were an extra one thousand burglaries to investigate this year, 999 calls rose by at least 2000 to 66,000 and a quarter of those turned out to be genuine emergencies requiring an immediate police response.

It’s well documented that violent crime is committed more frequently than it was a few years ago. This year it has jumped by a fifth. Knife crime rose by 17% and we have had a total of 20 fatal stabbings this year. Gun crime has risen by 7% with 7 people being shot and killed since January.

As crime rises we feel the stretch on resources more acutely. We currently face these pressures as our spending power continues to shrink. Since 2010 we’ve lost £175 million and more than 2000 officers. Despite driving efficiencies we had hoped for a cash injection from government this year. There were a number of opportunities. We didn’t get one.

It means the force can’t grow in response to rising levels of crime. It sadly means people will continue to feel frustrated that not enough time and attention is given to crimes committed against them as the force prioritises the most serious offences.

If we walk away with ‘no deal’ we risk losing our ability to easily share information with our European neighbours about criminals who cross borders to evade capture and continue committing crimes.

I think we can all agree, these are challenging times.

But we are lucky too. We have a police force with the most committed and determined workforce in the country. Not only that, but the West Midlands is filled with communities who want to go out of their way time and time again to help do their bit and stand up against those that seek to do us harm.

On Christmas Day this year, I for one will raise a glass to them.