“Today the Home Secretary announced £23 million in further cuts to West Midlands Police, equivalent to a further 5% reduction.  We were expecting about £18 million, but a further £5 million has been ‘top-sliced’ to pay for pet projects and inspections that add little to front line policing.  Again the government has relied on crude, across the board cuts that are inequitable and unfair.

“West Midlands Police faces the biggest and most unfair financial challenge of any police force in the country.  We have already made cuts of over £120 million, and following this today’s announcement, further reductions of about £100million will need to be achieved.  Flat rate cuts to the police grant hit us harder in the West Midlands because we rely on central government funding for a bigger share of our total budget.  It seems doubly harsh that we are punished for taking the second lowest contribution from local council tax payers in the country.  Our circumstances are made even worse due to unfair implementation of the national policing formula, which has cost us £367 million in the last 8 years.  We need the government to address how the funding we receive is restricted by the “floors and ceilings” imposed on the funding formula, which stops the West Midlands receiving its full share of central government funding.

Despite continued austerity, West Midlands Police has kept crime down, responded to massive operational challenges such as the NATO summit, Conservative conferences and EDL rallies, and still adapted to new priorities.  We have also been assessed by HM Inspectorate of Constabulary as having made an excellent response to the funding challenge, which will continue.  With resources diminishing however, it is certain that, after the current recruitment, officer numbers will continue to fall.  The capacity and capability of policing is under threat.  For that reason, I am calling on business and community leaders to join me in calling for the fairer deal for funding in the West Midlands.  We need to be given the amount the formula says that we should receive so that policing is able to continue protecting the right of people in the West Midlands to live life freely and safely. 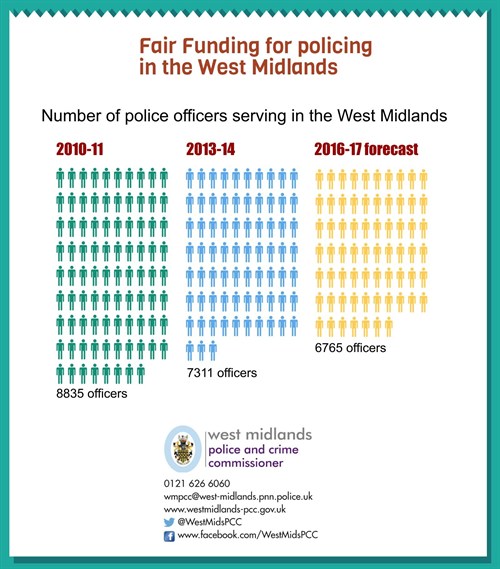 David Jamieson’s statement has been endorsed by

“Business crime, whether cybercrime or the theft of assets, remain a big concern to our members.”

Jerry Blackett, Chief Executive of Greater Birmingham Chambers of Commerce who said:  “We are disappointed to hear that West Midlands Police Force will be receiving a further reduction in budget. Business crime is already of great concern for local businesses.

“The Chambers’ recent survey showed that more than one in ten businesses had experienced some form of business crime in the last 12 months. The level of crime in an area, including incidences of vandalism and petty theft directly impact on decisions about business location. If we want to attract and retain businesses, and the jobs and wealth they create, our region needs a strong police force.

“We would urge the Government to fully consider the wider economic and community impact of cuts to policing before implementing these cuts. In addition, while we appreciate that this will be an extremely difficult time for West Midlands Police Force we would urge them to continue to forge and strengthen their links to the community, including businesses, to continue to improve the safety of our neighbourhoods.”