West Midlands Police and Crime Commissioner David Jamieson has highlighted the issue of discarded needles in Birmingham, as part of his campaign to show the cost of drugs to the region. 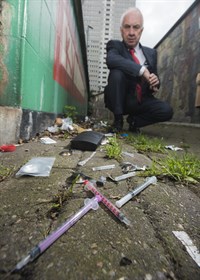 David Jamieson joined professionals who work to tackle the impact of drugs at locations where needles are discarded after use in public locations.

This follows the  Commissioner’s wide-ranging report on the cost of drugs to region which estimated a £1.4 billion impact on services each year in the West Midlands.

The report also revealed 701 needles have been recorded as discarded in the West Midlands by local councils. The figure is believed to be a tiny fraction of the true number.

On December 15 David Jamieson is hosting a wide-ranging summit on the solutions to tackle the region’s drugs issues and will be publishing proposals in the new year. 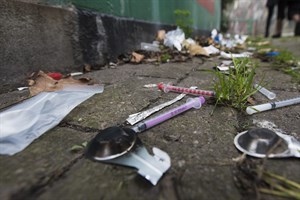 West Midlands Police and Crime Commissioner David Jamieson said,
“People are having to put up with the dangers of needles on their streets and where their children play. That is not acceptable.

“Rough sleeping has tripled in the West Midlands and increased six-fold in Birmingham since 2010. Addiction can be both a cause and result of rough sleeping. We need to break the cycle of addiction to reduce the number of rough sleepers in our towns and cities.

“Every three days in the West Midlands somebody dies from drug poisoning, with a death every four hours in England. The harm and misery that drugs are causing is unacceptable. This misery is also a source of profit for organised crime that needs stamping out.

“I want to see safer streets and make the West Midlands an area where people are less likely to be victims of crime. Drugs at the moment are costing the region an estimated £1.4 billion a year – money that could be supporting our schools, hospitals or funding police officers. This is the cost of failure.

“Before the end of the year I will host a wide-ranging summit to discuss practical solutions to tackle the issue of drugs, crime and the harm they cause.

“I will report back in the new year with deliverable proposals that I think can reduce the crime and harm that results from drugs in the West Midlands.”