West Midlands Police and Crime Commissioner David Jamieson and newly-elected West Midlands Mayor Andy Street have met to discuss joint areas of working and priorities for the next three years.

The meeting took place at the PCC’s office at Lloyd House in Birmingham and they were joined by West Midlands Police Chief Constable Dave Thompson. 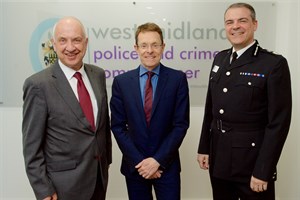 After the meeting West Midlands Police and Crime Commissioner David Jamieson said: “I congratulated Andy on his victory last week and re-iterated my commitment to work with the Mayor in the best interests of the people of the West Midlands.

“We discussed our shared approaches to tackling mental ill health, how we can give young people opportunities to steer them away from crime and gangs and build on the work I have started to drive investment into the region.

“In addition we discussed the hearings I have convened to improve the response to delays on our motorways and the role the new Mayor can now play to move this work forward.”

West Midlands Mayor Andy Street said: “On election I stressed that I wanted to unite the leadership of the West Midlands. I was therefore very pleased to have early constructive discussions with the Police and Crime Commissioner as there are many areas where we need to work together.”