Police and Crime Commissioner David Jamieson has officially appointed David Thompson as the next Chief Constable of West Midlands Police.

David Thompson will officially become Chief Constable and Chris Sims will retire from the force in January 2016.

The decision follows a rigorous selection process by the PCC which began with members of the public contributing towards the job description and concluded with a two day assessment.  During the assessment the successful candidate was questioned by a group of the PCC’s Youth Commissioners and a Citizens’ Panel.

The process and appointment have been scrutinised by the West Midlands Police and Crime Panel. The process was also described in a report by the independent College of Policing participant as ‘exemplary.’ 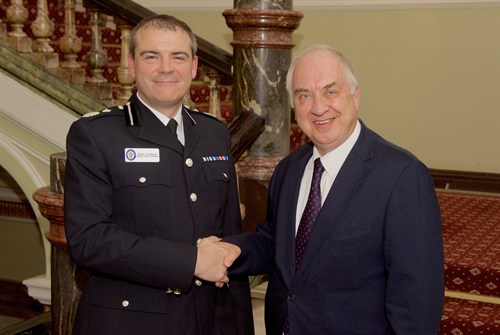 “This is the most important decision that a Police and Crime Commissioner can make and I am very pleased to be appointing such a strong and capable officer to take West Midlands Police forward.

“Chris Sims has been a superb servant to the West Midlands and has made a huge contribution to policing across the country. I wish him all the best in the next period of his life.”

David Thompson said,
“I am delighted to be formally appointed as the next Chief Constable of West Midlands Police.

“It has been an honour to serve as deputy under Chief Constable Chris Sims and I am extremely proud of what we, as a force, have achieved during this time.

“With this in mind I will very much be looking to continue the fantastic work of Mr Sims, and will spending the next few months working closely with him to ensure a smooth handover.

“Moving forward I want to reiterate that the command team and I remain fully committed to the WMP2020 programme and while there are many challenges that lie ahead, I am confident we are in a fantastic position to face them head on.