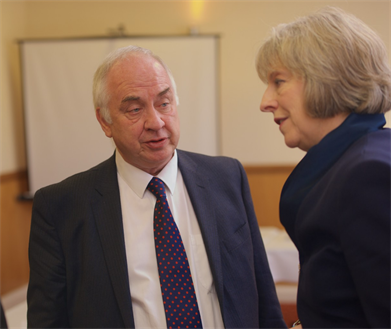 The West Midlands Police and Crime Commissioner is travelling to Downing Street on Monday for a Serious Violence Summit called by the Prime Minister.

David Jamieson has offered to help the government as it battles to address the problem of rising levels of violent crime across the UK.

The PCC, who is a former head teacher, has been asked to share his expertise on how education and good quality care can help.

The summit has been called as the government struggles to suppress levels of violence across the country. The West Midlands isn’t immune to the problem. Knife crime in the region has risen 85% since 2012 and gun crime is up by a third over the same period.

Mr Jamieson has repeatedly raised concerns about increasing numbers of pupils being excluded from schools. Studies have shown that those young people are more likely to go on and commit crime than students who remain in mainstream education.

The West Midlands has followed a national trend which is seeing an increasing number of pupils being permanently excluded. The number of excluded children has nearly doubled from 440 in 2010 to 727 in 2017. Across England the number of exclusions has risen from 5,740 to 7,720 during the same period.

The PCC’s top priority is the safety of students and staff within schools and insists head teachers must always have the right to remove unruly or dangerous pupils from their schools. However he is concerned that after almost a decade of cuts to spending on education by the government, increasing class sizes means schools don’t have the resources to support disruptive pupils.

The PCC is, however, most worried about the findings of OFSTED that show as many as 1 in 10 schools could be ‘off-rolling’ some of their pupils in a bid to protect the school’s league table position. Off-rolling is when a school forces or encourages a student with low predicted grades to leave. Some of those students can end up outside of the educational system and involved in violence.

The West Midlands Police and Crime Commissioner, David Jamieson, said: “At the summit I will call on the government to put measures in place to stop schools from off-rolling.

“I have proposed that schools should face a substantial financial penalty if they are found to be trying to force children – with low predicted grades – out. That money should be used for the ongoing education of that pupil.

“Knife crime is a national emergency, and this is one of the ways we can begin to tackle the issue along with additional funding for policing and preventative services.”

Across the country over 19,000 pupils did not progress from year 10 to year 11 in state funded secondary schools. The Children’s Commissioner has expressed concern that some of these pupils may be falling through the cracks and entering a life of crime.

The PCC will also reiterate his call that the West Midlands should receive between £15 million and £20 million from the government’s £100 million pot which it has made available to fight knife crime in the country’s worst affected areas.