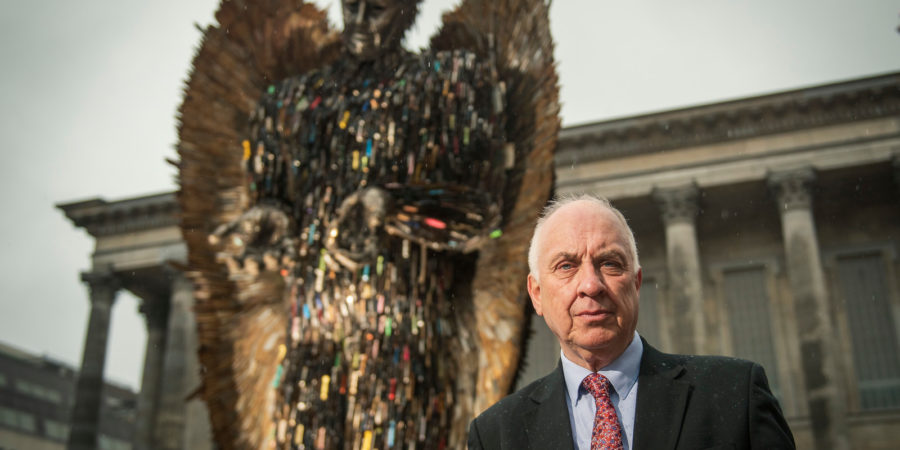 The 20ft tall sculpture, created from over 100,000 confiscated and surrendered blades, will be on display in the city centre from Monday 30 March until Monday 27 April as part of a nationwide anti-violence tour.

Created by the British Ironwork Centre and weighing some 4.5 tonnes, the Knife Angel is both a powerful symbol of hope and cohesion, and a salient warning of the dangers of carrying and using bladed weapons.

Police and Crime Commissioner David Jamieson said: “Knife crime is a national emergency. In the West Midlands, it has more than doubled since 2012. The tragic loss of life from knife crime has been felt across our regions but especially in our cities.

“The Knife Angel is a reminder of the devastating impact of knife crime has of families and communities.

“To tackle violent crime, we all need to work together. This is not an issue that the police can simply arrest their way out of. It requires preventative work to divert young people away from crime, but also requires us to invest in opportunities to help all young people fulfil their potential.

“Wherever the Knife Angel has visited, it has been a calling point for action. It has brought people together and renewed people’s commitment to improving things for young people. I hope the Knife Angel visiting Wolverhampton will have a similar impact.”

Councillor Ian Brookfield, the Leader of the City of Wolverhampton Council, said: “We are delighted to be working with our partners to bring the Knife Angel to our city.

“There’s no denying that Wolverhampton, like any other city in the country, has its share of knife crime. The good news is that fewer young people in Wolverhampton were a victim of knife crime in the last six months of 2019 – and we want to ensure that downward trend continues.”

Councillor Jasbir Jaspal, Cabinet Member for Public Health and Wellbeing, added: “It’s important that we get the message across that violence needs to stop and we hope that displaying the Knife Angel in our city will not only help continue to turn the tide against knife crime and all other forms of violent behaviour, but also enable us to remember those whose lives have been lost or irrevocably changed as a result of violent and thoughtless actions.”

Businesses, organisations, schools and community groups will be encouraged to hold events and activities to mark the Knife Angel’s visit to Wolverhampton. People will also be invited to take part in a national photography competition to capture the most inspiring and impactful picture of the Knife Angel during its time in the city.

During the 28 days that the Knife Angel is in Wolverhampton, a knife surrender will also be taking place. All knives surrendered will be used to create a new sculpture for Wolverhampton as part of the Angel’s legacy, through the joint efforts of partners in Wolverhampton and the British Ironwork Centre.

If your business would like to find out how you can help bring the Knife Angel to Wolverhampton, or if you are interested in holding an event or activity to support its visit, please email knifeangel@wolverhampton.gov.uk for further details.

Councillor Jaspal added: “We want the Knife Angel’s visit to Wolverhampton to be an event which the whole community is involved in and, over the coming weeks, we will be encouraging people to think about what they could do during the 28 days the sculpture is with us.”