Police stand up – and stand out – for equality 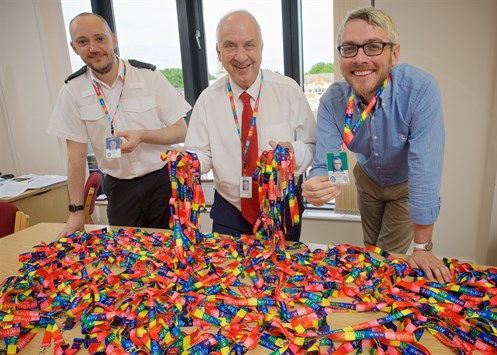 One hundred West Midlands Police officers and staff a month are putting their name to a scheme to increase equality.

Just eight weeks after Chief Constable Dave Thompson and other members of the Executive team signed up to the Allies initiative, membership has surged to more than 500.

Allies are individuals who do not identify as LGBT but who believe that lesbian, gay, bisexual, and transgender people should experience full equality in the workplace.

Police and Crime Commissioner David Jamieson said: “Allies are role models who create truly inclusive workplaces and send a strong message to the wider community. Some of the world’s most successful organisations have introduced similar schemes.

“To increase their visibility I have funded the purchase of lanyards in the colours of the rainbow – the worldwide symbol of LGBT pride.

“They are a powerful statement about who we are as an organisation and as people who value diversity. It is a symbol which I myself wear every day and one which I would encourage others to adopt.”

Allies is cost free to the force and those who sign-up to the scheme receive similar benefits as members of the LGBT Network. Personal details are held on a secure database not connected to force systems. Allies membership is not mandatory and is in addition to the force’s legal and moral equalities duties.

The scheme is backed by the gay rights group Stonewall and managed by the force’s LGBT Network.

Chairman of the group, PC Gary Stack, said: “I’m really very grateful to Mr Jamieson for his donation which we have used to buy 900 lanyards for Allies from a local business.

“Our ambition is to have 75 per cent of the entire workforce sign-up. And while we have a long way to go to reach that figure, 500 is a significant milestone particularly as we already have 390 regular Network members.”

West Midlands Police is ranked at 71 out of 400 top UK businesses in terms of LGBT rights.

Formed in 2000 West Midlands Police’s LGBT Network is the largest of its kind in the country.

The group provide members with access to mentoring, exclusive taster sessions in departments looking to boost the number of LGBT people within their teams, regular networking opportunities, support during HR or  PSD proceedings, and more.

Hundreds offered the chance to turn their back on drugs