West Midlands Police and Crime Commissioner David Jamieson has announced a set of practical proposals to tackle the cost of drugs to public services, reduce drug related crime and the shocking number of deaths in the region, in a report published today.

The Commissioner’s proposals include: 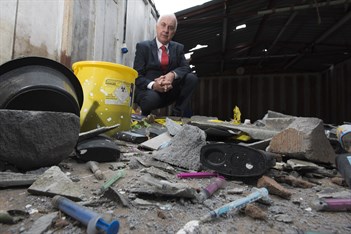 The proposals follow a detailed report already published by the Commissioner on the cost of drugs to the West Midlands. It estimated that the cost of substance misuse in the West Midlands is £1.4 billion each year. Half of all burglary, theft, shoplifting and robbery is committed by people suffering from serious addiction to drugs including heroin and crack cocaine. Every three days in the West Midlands somebody dies from drug poisoning, while organised criminals are profiting from this misery.

There has also been a consultation and wide-ranging summit that brought top politicians, health professionals and drugs experts together to find new ways of tackling the problem of drugs in the West Midlands.

Speaking about his proposals to tackle the scourge of drugs, West Midlands Police and Crime Commissioner David Jamieson, said:

“Despite the good work being done by many, collectively our approach to drugs is failing. Drugs are costing the West Midlands £1.4 billion each year.

“It means people are forced to live with more crime, public services are put under strain and not enough is done to reduce the suffering of those who are addicted.

“If we are to cut crime and save lives there’s one thing we can all agree on; we need fresh ideas.

“These are bold, but practical proposals that will reduce crime, the cost to the public purse and the terrible harm caused by drugs.

“These proposals tackle the drugs market head on, hitting the organised criminals profiting from the misery of others.

“By the end of my term of office in 2020, I hope many of these proposals are in place and having an effect – reducing crime, but also the suffering of those addicted to drugs. These proposals will save the public sector money by reducing the strain on services that currently exists.

“I will be working with partner organisations intensively over the coming period to deliver on these practical and common-sense proposals.”

“These recommendations from the West Midlands Police and Crime Commissioner are an important and welcome contribution to the growing momentum behind common sense drug policy reform in the UK. Health professionals, police, and the public are all agreed that a public health – rather than criminal justice – approach to drug policy is what is needed to tackle rising rates of drug harm in this country and beyond.

“We know that diverting people suffering as a result of harmful substance use away from the criminal justice system and into treatment leads to better outcomes for the individual and for society, and we know that pragmatic harm reduction interventions such as drug consumption rooms, heroin assisted treatment and drug safety testing can play an extremely helpful role in that process. It is heartening to hear more influential voices, with on the ground experience of these issues, give these measures their backing.”

“I will be working tirelessly over the coming months to build coalitions to get these proposals into action.

“Drug use and dependence should first and foremost be treated as a health issue. We should be tackling the root causes of crime, rather than just react to criminality that follows.

“We currently have an approach that is soft on the big-time criminals who are profiting from the misery of others and weak on giving people the support they need to recover from addiction.

“I am determined to reverse that. My proposals will take the market away from the organised gangs and ensure that those who need support to recover get it.”