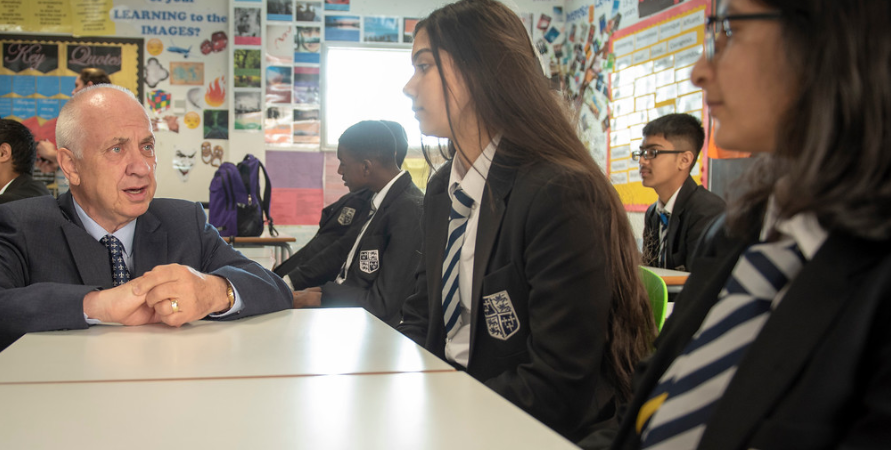 West Midlands Police’s top officer and the region’s Police and Crime Commissioner have come together to urge parents to speak to their children about the devastating impact of carrying knives ahead of the summer break.

A year on from calling on schools to have “heart-to-heart conversations” with children in an attempt to steer them away from knives, Chief Constable Dave Thompson and West Midlands Police & Crime Commissioner David Jamieson are extending this plea out to parents.

Over the last year, at least three-quarters of the region’s over 200 secondary schools have held knife crime talks with their pupils, reaching over 150,000 young people. Each year the Precious Lives project funded by the West Midlands Police and Crime Commissioner also reaches 35,000 young people.

The plea and the force’s #lifeorknife campaign is backed by the Brindley family, who lost their son James to knife crime in Aldridge just over two years ago. The family have recorded a ‘how to have a conversation with your child about knife crime’ video which is being aired on Facebook and Twitter to help guide parents through what the force acknowledges is a ‘difficult conversation.’

Backing the plea to parents to talk to their children about knives is James’ father, Mark Brindley. He said: “Parents should be worried because if James’ murder highlights anything, it’s that it can happen to anybody, anywhere at any time. Any parent who thinks that this can’t happen to their children is burying their head in the sand I’m afraid, nobody can take that attitude anymore, everyone has to take personal responsibility.

“Really fundamentally parents need to talk to their children and have those difficult conversations and they’ve got to be aware of whether their children are carrying knives when they leave their home. That is the most important role we ever have as a parent and we need to find the time to do it.”

An emotional video outlining James’ story and the devastating consequences of knife crime on his family is also being played as part of West Midlands Police’s #lifeorknife campaign and Precious Lives inputs into schools.

In the video Beverley Brindley, whose son James was murdered on 24 June 2017, talks directly to pupils who feel they need to carry a knife. She says: “Don’t do it. If you feel you need guidance and support in your life, there are plenty of people out there, including your own family and friends that you trust, that you can turn to get the help that you need. Don’t be afraid to ask.”

Mr Thompson said: “We have been spending the last year talking to pupils in schools about knife crime. I want parents to have heart-to-heart conversations to really drive home the message that carrying weapons is unacceptable and won’t be tolerated.

“We all feel the heartbreak of the loss of anyone so young – and a death at the hands of a knife is all the more traumatic and senseless.

“We have to be open and talk about the evil of knives and the trail of devastation they can cause. This can’t be done by anyone alone; we need schools, parents, police and all our other partners to play a part.

“By having conversations at an early age, both at school and home, about the awful consequences of carrying a knife this can impact on ways of thinking. It can stop someone from not only ruining their own but other lives.

“We will enforce the law to its fullest when anyone chooses to carry a knife, but we are determined to stop it even reaching that point. As adults we owe it to our young people to work with them to make them safe this summer.”

The West Midlands Police and Crime Commissioner is funding a full programme of diversionary activities over the summer to help steer young people away from potential trouble. Activities will be taking place across the region, including at: the Ackers Trust in Birmingham, with the Positive Youth Foundation in Coventry and Active Black Country, to engage thousands of young people in sport and other projects.

West Midlands Police & Crime Commissioner David Jamieson called on parents to play their part in knowing where their children are over the summer and what they are doing.

He said: “A year ago the Chief Constable and I called on all secondary schools in our region to have a conversation with pupils about the dangers of knife crime. We are now asking parents to have that conversation with their children over the summer.

“To support we are rolling out sports and diversionary projects and I’d like to thank the Brindley family for producing a video to help parents have a conversation with your child about knife crime.

“Violent crime is a national emergency. Whilst robust policing has an important role, tackling the root causes of crime and the support of the whole community, including families is crucial if we are to address it.”

Holte School deputy head teacher Andy Oliver, said: “We are at the forefront of tackling knife crime and this has been recognised both locally and nationally.

“We go above and beyond in educating our pupils about the dangers of weapons and being as proactive as possible in ensuring the students do not get sucked into that way of life.

“Part of that commitment to our students is making sure that parents are supported and feel comfortable having these conversations, which can be difficult, with their children.”

More information about knife crime and the #lifeorknife campaign can be found on the West Midlands Police website.

Anyone who suspects someone of carrying a knife is urged to report their concerns via Live Chat on the website, by calling 101 or by calling Crimestoppers anonymously on 0800 555 111.