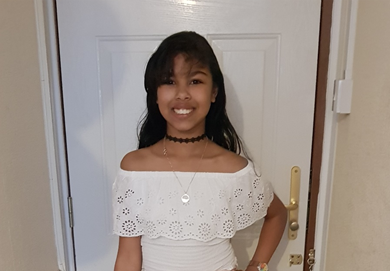 A nine year old girl has been nominated for a top policing award after reuniting a burglary victim with his sentimental jewellery.

Tamiia Laville from Druids Heath, found a bag of gold watches and jewellery hidden under a bush by Brockworth Road.

Without a second thought, the nine year old immediately handed it to the police.

Tamiia didn’t realise at the time but the bag of valuables belonged to 77 year old Joseph Smith, from Birmingham.

Mr Smith’s home was raided by thieves in October 2018. The burglars stole TVs, a laptop and cash as well as a number of valuable and sentimental possessions.

The items belonged to his late wife, who had passed away eight years earlier after 50 years of marriage.

With no CCTV or forensic evidence, police were unable to trace the offender of the stolen items. Mr Smith feared his late wife’s possessions were gone forever.

After months of worry, Mr Smith was reunited with all 28 pieces of jewellery.

In February 2019, Mr Smith met up with Tamiia to thank her for her honesty.

“It is wonderful to see that these treasured possessions were reunited with their rightful owner. This is a truly heart-warming story.

Speaking about the discovery, Tamiia Laville said: “I felt really proud of myself for reuniting the jewellery with Mr Smith.

“The look on Mr Smith’s face made me extremely happy. It was just a normal day, I didn’t expect to find anything important, but I did and now I’m the local hero!

“I’ve also gotten Star of the Week at school because of it. Which makes me even more proud”.