A service to commemorate Special Constables who have lost their lives in the line of duty, took place at The National Memorial Arboretum in Staffordshire on Sunday (14th June).

Amongst those present, at the National Arboretum, in Alrewas, who laid wreaths and paid their respects, were past and present police colleagues as well as senior dignitaries from the region.

West Midlands Police and Crime Commissioner, David Jamieson, who attended the event, commented:  “The dedicated men and women who give up so much of their spare time to selflessly support their local police force, in order to help make their communities a safer place to live and work, deserve our heartfelt thanks and gratitude.

“For any police officer to lose his or her life in the line of duty is one needless death too many and to lose a special constable in this way is a particularly cruel tragedy.

“It was humbling and a privilege to visit Staffordshire’s National Memorial Arboretum to pay my respects.”

The Special Constables Recognition Stone, which was unveiled at the National Memorial Arboretum in 2012 to mark the work of the special constable volunteers in the West Midlands, West Mercia, Staffordshire and Warwickshire forces.

A service of remembrance was followed by the last post and the lowering of standards as those present, including Police and Crime Commissioners from the West Midlands, Warwickshire and West Mercia as well as the Deputy Police and Crime Commissioner for Staffordshire, paid tribute to those who died in service to their country and local communities. 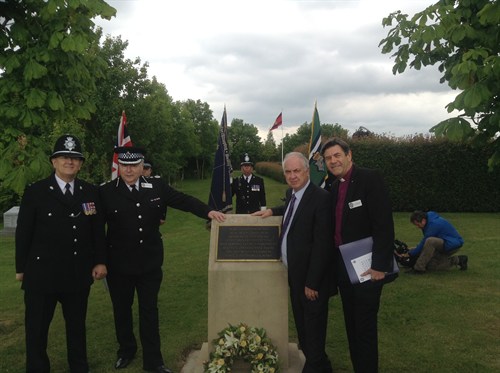