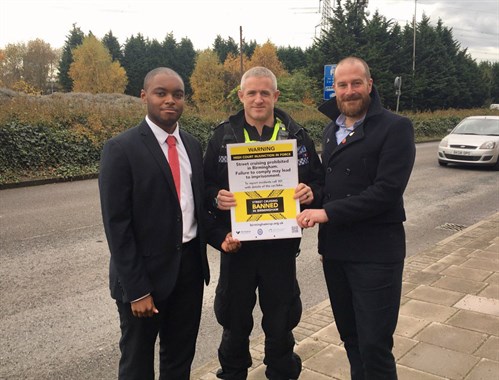 Road menaces that plague the region’s roads face being jailed under a new injunction banning street racing and ‘cruising’ across Birmingham.

The High Court order – secured by Birmingham City Council and West Midlands Police – means anyone caught racing or joining unauthorised vehicle rallies on the city’s streets will be held in contempt of the ruling and can be hauled before a judge.

It spans the whole of Birmingham and also covers wider anti-social motoring like riding in convoy, performing stunts, or revving engines, blaring horns and playing loud music at vehicle gatherings.

The order – which runs for three years – came into force at the end of last month and follows similar injunctions granted to cover Solihull and the whole of the Black Country.

“The overwhelming majority of road users are appalled by the actions of the dangerous and inconsiderate few. I am sure that they will welcome this strong action.”

Assistant PCC Ashley Bertie added: “This sends out a strong message that street cruisers will be hauled before a judge to face tough punishments. I am confident this Birmingham injunction will be as successful as those in the Black Country and Solihull.”

He said: “This latest move is all part of Operation Hercules – a real collaborative approach involving traffic cops, local officers, and neighbouring forces to tackle motorists and bikers who pose a danger to other road users.

“We’ve taken strong action in the past on street racers, with hundreds taken to court, banned from the roads and handed hefty fines. But recently we have started to see groups of bikers – many on scramblers and mini moto’s – causing a nuisance on our streets, pulling wheelies and intimidating other drivers.

“This injunction will cover all aspects of anti-social motoring – including people who organise or promote road cruising events – and people need to realise it’s not acceptable and they could end up in court.”

Signs will be erected at the roadside on hotspot routes – including the A47 Fort Parkway, the A38 , A45 and city centre ‘Middleways’ – while around 2,000 A3 posters will be popping up in petrol stations, shopping centres and football grounds warning of the injunction.

The Black Country road ruling – introduced in February 2015 – has resulted in a significant downturn in street racing and seen 11 people so far being convicted of contempt of court by breaching the order.

Councillor Waseem Zaffar, Cabinet Member for Transparency, Openness & Equality in Birmingham, said: “We take street racing very seriously as innocent lives are at risk. Anyone who races on Birmingham’s roads needs to know they will be prosecuted, are likely to lose their licence, face a fine running into thousands of pounds and possibly imprisonment.

“We will also consider tenancy enforcement action for tenants or family members identified as being offenders in breach of this injunction.”

In March, seven people were given suspended jail sentences – and handed fines totalling £3,600 – for their part in a car cruising event on the Black Country Route.

Anyone found in contempt of the court order could be jailed for up to two years.