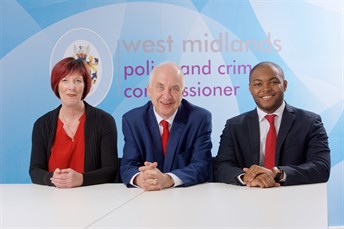 “I am really pleased to be announcing that Lynnette Kelly will be joining my top team. She brings a wealth of experience and a can-do attitude. She will be working closely with Ashley Bertie and myself to deliver my Police and Crime Plan.

“We will work to continue to ensure that West Midlands Police remains the country’s most efficient police force so that all our effort goes into protecting our communities from the scourge of crime.

“Over the coming months we will be launching a new Cadets Scheme for West Midlands Police, continuing the recruitment of officers and making sure that the force is ready to face the challenges of the future.”

“I am proud to be joining the PCC’s top team as an Assistant Police and Crime Commissioner.

“In particular I am looking forward to working with the business community to drive forward investment and ensure people have the opportunities they need to gain employment and stay away from crime.”

“I am really pleased to be re-appointed. In the next year I will focus on giving opportunities to young people, continuing to reform stop & search and ensure that the new West Midlands Police Cadet Scheme is delivered.”

Ashley Bertie will have particular responsibility for young people and Dr Kelly will be the lead for partnerships.

As Assistant Police and Crime Commissioners they will also be members of the PCC’s Strategic Policing and Crime Board, who meet in public on a monthly basis to scrutinise and hold West Midlands Police to account. They were appointed after an open process.

Councillor Doctor Lynnette Kelly is a member of Coventry City Council and a former Cabinet Member for Business, Employment and Enterprise on the authority. She was previously a member of the Coventry and Warwickshire Local Enterprise Partnership and has a Doctorate from the University of Warwick.

Ashley Bertie has served as an Assistant Police and Crime Commissioner for a year, and has played an integral part in the Commission on Gangs and Violence that is examining the root causes of crime and the opportunities that young people need to divert them from crime. Ashley has also driven forward the young people’s agenda and is working closely with West Midlands Police to establish a Cadets scheme.