The West Midlands PCC has convened a multi-agency response to the early release of prisoners. 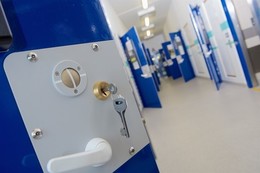 On Saturday 4 April 2020 the Ministry of Justice announced that up to 4,000 “low-risk” prisoners would be released early as part of efforts to tackle the spread of coronavirus in jails.

The meeting convened by the PCC includes partners from West Midlands Police, the Prison Service, Probation Service, Public Health England, local authorities and third sector organisations.
Inmates with two months or less still to serve will be released on temporary licence in stages.

The selected low-risk offenders will be electronically tagged and can be recalled at the first sign of concern.

The West Midlands Police and Crime Commissioner, David Jamieson said: “We are living through unprecedented times and we must do everything to slow the spread of COVID-19.

“I am determined to ensure that the early release programme does not put the safety of the people West Midlands at risk, therefore, this meeting is key to ensuring partners are effectively working together and have clear lines of communication.

“The early release programme will prevent thousands of prisoners and prison staff being infected whilst in prison and this will help reduce pressure on the NHS”.

Superintendent Jane Bailey, deputy head of Criminal Justice Services for West Midlands Police said: “I want to reassure the community that those who are being released early will be subject of electronic monitoring.

“We are working closely with the prison service and other partners, to link prisoners released early to support and services in the community to prevent any reoffending.”

Her Majesty’s Prison and Probation Service said: “This announcement sets out plans to bring a cohort of people into scope for release who are within two months of their release date.

“Their release will be subject to a number of very strict criteria which will exclude many from being eligible.  Those who are will be released under Release on Temporary Licence ….until they reach their automatic half way release point when they will become our statutory cases, subject to licence supervision in the usual way across the Probation Services.

“To ensure they have the support they require to resettle into the community, those released will receive ongoing Through the Gate support on the key resettlement pathways as they would have received in custody.

“We are working closely with prison colleagues, the police and a range of partners to ensure co-ordinated arrangements are in place to manage the pre-release risk assessment processes and ensure the resettlement support is in place across our area.”

Arron Owen from Cranstoun, the organisation commissioned by the PCC to provide Arrest Referral Services and drug testing in custody said: “In preparation for the early release of many prisoners across the country, it is important that prison and community treatment teams plan a smooth transition for those using drugs and alcohol.

“Continuity of care is essential to protect the service user, families and wider communities. Business as usual is not appropriate in the context of the Covid-19 crisis and both prison and community teams need to work even harder to safeguard as many people as possible.

“Together, we need to ensure there is no disruption to substitute prescribing, that the life-saving medication Naloxone is issued to all drug using prisoners upon release and that treatment continues throughout this extraordinary period”.

Cranstoun continue to deliver Arrest Referral Services within the custody suites of West Midlands Police. This ensures drug and alcohol using offenders are offered the opportunity to access treatment in this difficult time.