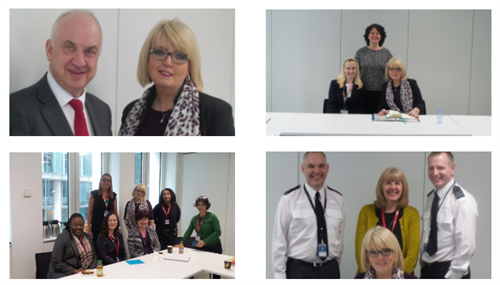 Baroness Newlove also met with victims to hear their stories and experiences of support services in the region funded by the PCC.

West Midlands Police and Crime Commissioner David Jamieson said: “It was an extremely insightful day with Baroness Newlove, who is visiting PCCs around the country to find out how victims of crime are supported in each area.

“She was particularly interested in my Victims Commission and the specialist officers who support families after fatal car crashes, as well as hearing about our work in the fields of FGM, domestic violence, child sexual exploitation and sexual abuse.

“We also had an in-depth discussion about my desire to see criminals’ fines ploughed back into services for victims.”

Baroness Newlove described the visit as ‘interesting and useful’ and was impressed with the collaborative approach to victim care in the West Midlands.

Baroness Newlove was appointed Victims’ Commissioner in 2012. She is a fierce campaigner for victims’ rights following the murder of her husband Garry Newlove in 2007.