The West Midlands Police and Crime Commissioner, David Jamieson, says he is ‘delighted’ after hearing that Wolverhampton student Brian White can remain in the UK indefinitely.

The PCC threw his weight behind Brian’s campaign to stay after learning that his future in this country was under threat. The Home Office had said Brian might be deported; a move which would have cost him his place at Oxford University. 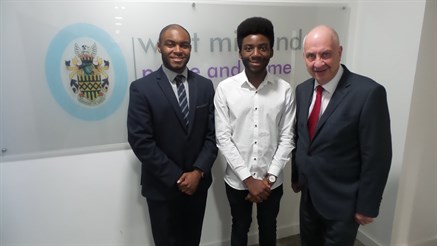 Brian White, who is now 21, moved to the UK from Botswana aged 15 with his adoptive family. Mr White lived in a Zimbabwean orphanage until the age of six. He was fostered and later adopted by the White family, who eventually moved to the UK. In 2014, his application to become a British citizen by naturalisation was rejected. When he arrived he was granted limited leave to remain by the Home Office, rather than indefinite leave. His family appealed, but that was also rejected. Today (Monday 4th September) he learnt that he had been granted ‘Indefinite Leave to Remain’.

The change in status means Brian can take up his place at Oxford University, something the straight A pupil has been working towards his entire life.

The Police and Crime Commissioner, David Jamieson, said: “This situation should never have arisen. Brian is a bright, talented individual who calls the UK home.  When I heard Brian’s story I felt compelled to act. It was always wrong for Brian to be torn away from his family and to be unable to fulfil his full potential at University. This is a victory for common sense. I wish Brian all the best as he embarks on his study at Oxford.”

Mr White said: “I am over the moon. This is the result I dreamed of. I can’t wait to start my undergraduate course in Chemistry. I’d like to put on the record my thanks to the Police and Crime Commissioner and everybody else who helped make this possible. Words can’t describe how happy I am.”