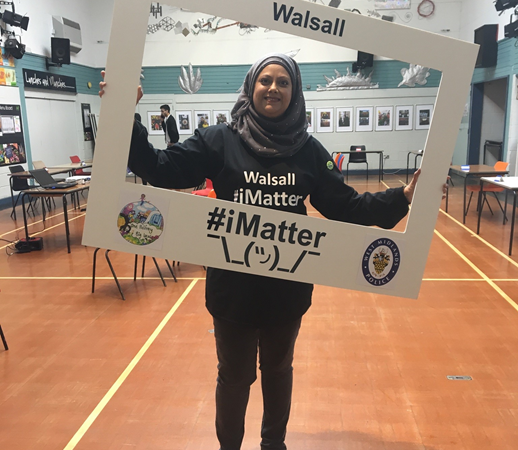 A  group  in Walsall  which  has  educated thousands of school children about the dangers of sexual exploitation and other crimes  has been shortlisted for an award by the West Midlands Police and Crime Commissioner.

The scheme hasn’t just been targeting children though.  iMatter Walsall has also been  to  Manor  Hospital and spoken with more than 350 staff to raise awareness of  child sexual  exploitation.

The woman behind the scheme is  Imrana  Niazi. She volunteers 25 hours  every  week  and considers it her goal to  sign-post victims to  the authorities so they can receive  help.

Commenting on the shortlisting of  iMatter  Walsall by the PCC,  Imrana  Niazi  said: “When I received the letter that I’d been shortlisted for an award I couldn’t believe it.

“I’ve  spent hundreds of hours working on this scheme  and hopefully  it is  making the  children in Walsall just that little bit safer.

“If one child is rescued from a terrible situation  then all this will have been  worthwhile. It is lovely to have your efforts recognised.”

Whilst  the West  Midlands  Police and Crime Commissioner, David Jamieson, said: “This scheme has achieved some fantastic things and it has only been up and running since last October.

“To have already educated six  thousand youngsters is quite remarkable.

“I’d like to personally offer  my thanks to  Imrana. The work she is doing is helping the police keep young people in Walsall safe.”