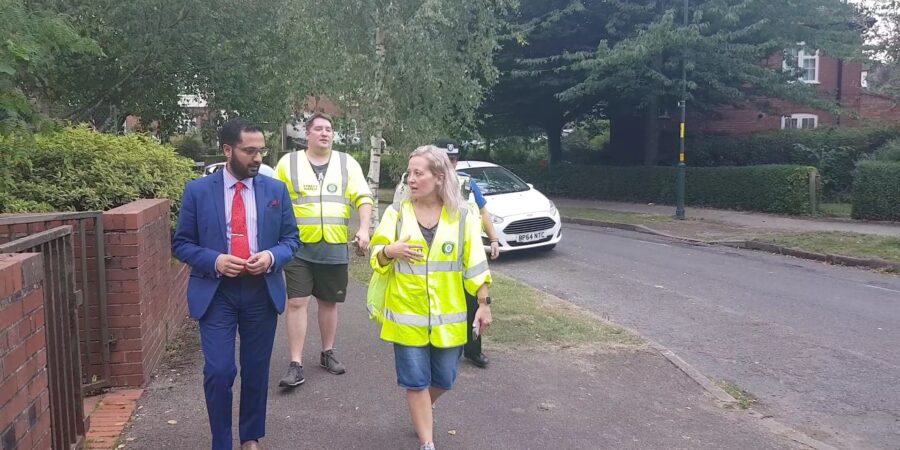 West Midlands Deputy Police and Crime Commissioner, Waheed Saleem has announced £20,000 for Street Watch across the region this money will be spent on providing equipment and essential items.

Yesterday the Deputy PCC, met with members of the Harborne Street Watch and took part in a patrol of the community and is calling on more people to join their local group.

The volunteers patrol the local area twice a week and act as the eyes and ears of the community. If volunteers spot suspicious activity they report it to the police to action. The group currently has 32 volunteers.

Street Watch is a community-led initiative based on street patrols carried out by members of the public with no police powers. Volunteers patrol in pairs and register each patrol on a website.

Groups are managed by a volunteer co-ordinator who keeps a volunteer list and provides advice, guidance and support in consultation with the local police. There are 196 Street Watch groups across the West Midlands with 1570 volunteers as well as 420 trained members of staff supporting them.

The Street Watch group aim to improve safety in their local community, helping to reduce crime and keep their streets clean.

The Harborne Street Watch group are actively working to keep their local community safe by regularly giving out crime prevention advice as well as preventing crime by knocking doors when they see items left in cars. They have also identified a local Cannabis factory which was reported to the police.

“When walking around with the volunteers I met residents who told me that the work Street Watch does is effective and that they often disrupt drug dealer’s activity.

“Street Watches are a fantastic way of getting communities to work together to reduce crime and anti-social behaviour. The £20,000 allocation will be spent on equipment and essential items which will enable the groups to continue to make a positive impact in their local community”

“I would encourage as many people as possible to get involved in their local patrols”.

Chief Inspector, Jayne Goodridge, who is the force lead, said: “Street Watch builds communities and community spirit. It’s about neighbours getting together and working in partnership with the police to make their areas safer and reducing crime.

“But it also has a huge social benefit – people get fitter, make new friends and become far more involved in the areas they live.

“This investment is a big boost for Street Watch and will ensure the great work it does every day can continue.”

Street Watch Coordinator for Harborne, Sarah Hanson, said: “The reason why I do Street Watch is because I love working with the local community and creating partnerships with the police.

“Street Watch provides people with the chance to get to know new people and building positive relationships with members of the community and making people feel less isolated.

“A lot of our work means we can stop opportunist crime by just being viable in the local area.”

If you would like to register your interest to participate in Street Watch please email Streetwatch@west-midlands.pnn.police.uk.